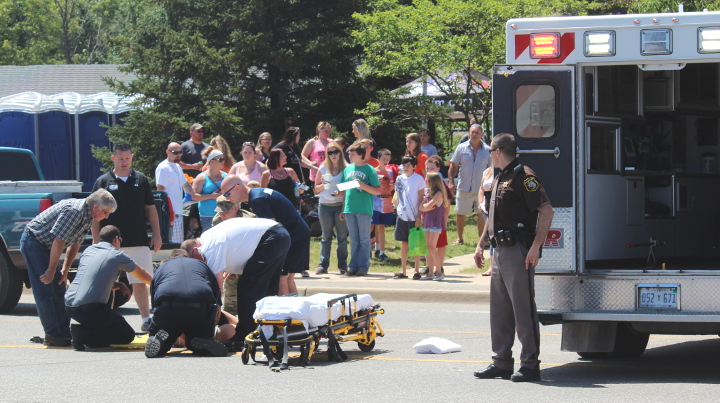 GRAYLING – A Grayling woman and her infant son were injured in a vehicle accident July 25 about 1:07 p.m. near the intersection of North James and Ionia Street.

According to a statement from Grayling Public Safety Chief Russell H. Strohpaul, Jr., the accident occurred when the 52-year-old male driver of an unidentified pickup truck was attempting to turn left on to southbound James Street; Pedestrians were attempting to cross James Street between gaps in traffic.

The truck hit a 25-year-old woman and a one-year-old boy. Both were initially transported by Mobile Medical Response (MMR) to Munson Medical Center in Grayling.

The statement said everyone involved in the accident was from Grayling, but didn’t disclose the names of

the adults. Traffic was slowed for 30 minutes while the injured were treated and the accident cleared.

Traffic and Safety Engineer for the Gaylord MDOT office, Jason Bodell, said he was not familiar with yesterday’s accident. He noted that officials at the state and local level have been working on adding a ‘Mid Block Crossing’ at the south end of the AuSable River Bridge. The crossing is identical to a different crosswalk on the I-75 Business loop near the Grayling Mini-Mall.

‘We’ve worked with officials on implementing crossing at the bridge area in order to provide a safe crossing to either side,’ Bodell said.

The crossing will include an American Disability Act (ADA) approach ramp, signage on the roadway, and piano bar markings (white stripes) to mark the crosswalk.

‘We’ve been in discussions with officials for more than a year on this,’ Bodell added. ‘Our goal is to have the crosswalk in by fall.’

Grayling Public Safety, police and fire units, and deputies from the Crawford County Sheriff Department were at the accident scene within seconds.

Drugs and alcohol do not appear to be a factor in the accident, which remains under investigation. Preliminary contributing factors include heavy traffic volumes, pedestrians crossing against traffic, and distracted driving.