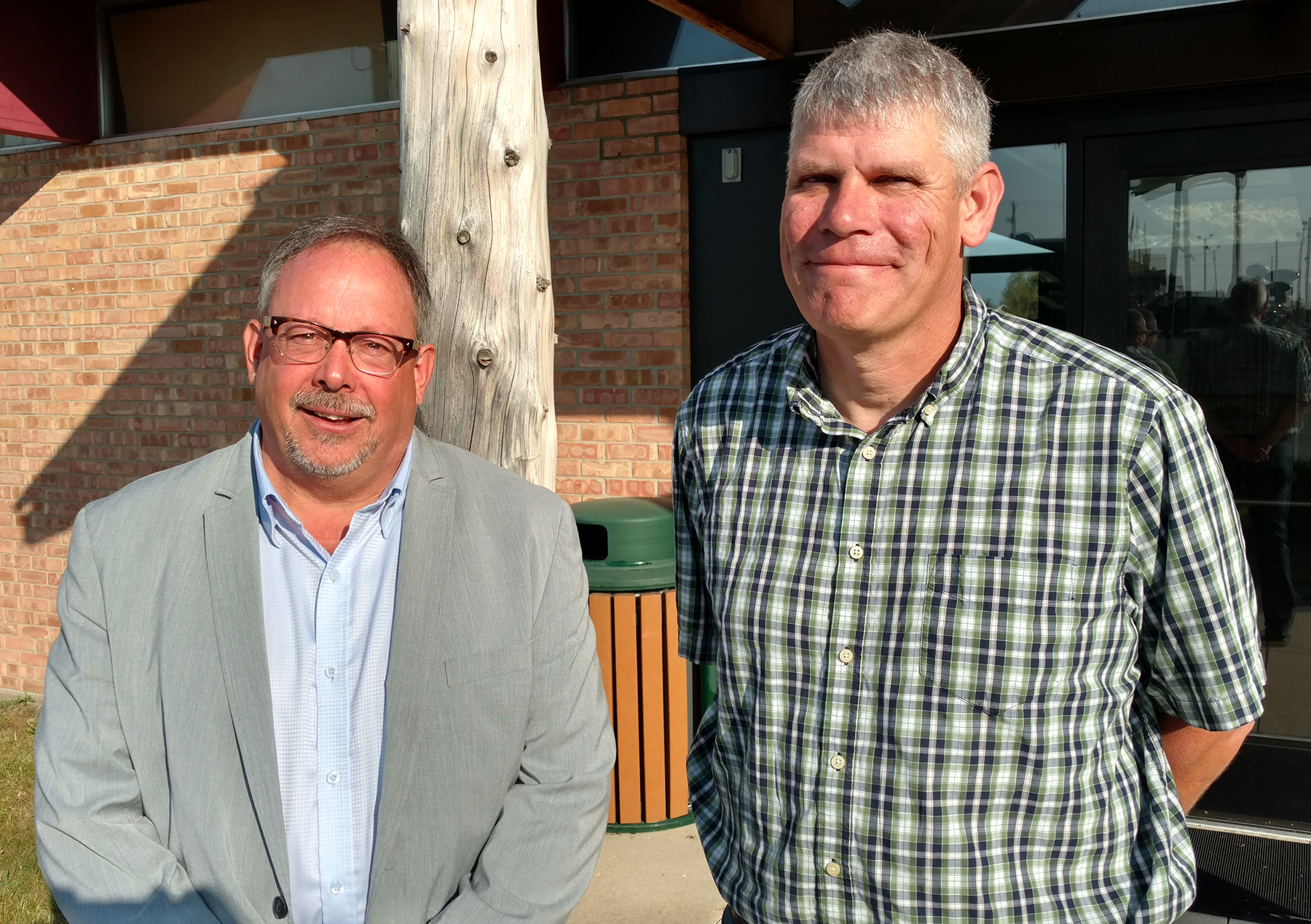 By Mark Constance
GRAYLING – A South American company with plans to build a $325 million particle board mill on Four Mile Road just South of Grayling, has started seeking permits for the project, and plans to have it operational by late 2018.

The facility will be the single largest continuous particle board press in North America. Upon completion, the plant will compliment another ARAUCO facility in Sault Ste. Marie, Ontario.

The plant will have full lamination capabilities to support the company’s Prism TFL Decorative Servicing Program. The company produces sustainable forest products produced in nine mills in North American and Grayling will be the 10th. The also have 29 mills in South America. North America comprises 28 percent of the company’s annual revenues.

Matt Gibbon, Management Consultant for ARAUCO North America, and Dan Kasten, regional maintenance manager, made an early morning presentation to the Grayling Regional Chamber of Commerce, May 24, discussing the details of the project. A longer, and more formal presentation was held at 6 p.m. that evening at the Grayling Township Hall.

Gibbon said the company expects to have permits in place by September. Construction could begin in late 2017. The plant is expected to create 250 permanent, full-time jobs, and potentially, an additional 500-700 ancillary positions.

‘If we can get the foundations in before winter comes, then we can build during the course of the winter and start bringing in equipment.’

Gibbon said most of the manufacturing equipment is being imported from Europe. Additional purchases will need to be made for ‘anything not bolted to the floor’ such as fork lifts, shelving and incidental production and office-related items.

‘We’ll be buying hardwood, softwoods and all of our raw materials from local sawmills and other area suppliers. We’re also buying chips and will burning tree bark to supply power to the plant.,’ Gibbon said. ‘A belief we have is that you need a well balanced system. You need to have raw materials and solid processes that lead to a finished panel product, but you have to make sure you can sustain the operation GÇª We utilize the full tree.’

The facility will be built on 640 acres of land (almost a square mile), near the ‘Co-Gen’ plant on Four Mile Road. The road will be widened and part of the entrance will include a ‘buffer zone, blocking the view of most of the facility from the road.

According to Grayling Township Supervisor Rick Harland, the property originally belonged to the Michigan Department of Natural Resources (DNR), which was willing to sell it to the company at a reduced price after it was designated as a ‘renaissance’ zone.

Harland said a ‘Forest Renaissance Tax Abatement’ was approved by the county and the township. Although the full abatement can run up to 15 years, the state negotiated an agreement wherein the first 12 years the plant will pay no property taxes. The abatement will decrease to 75, 50 and 25 percent in years 13-15, paying full taxes starting in the 16th year.

Harland said the development was made possible in part because of a memorandum between Grayling Township and Beaver Creek Township more than 20 years ago to form a water authority. At the time of the memorandum there was talk of an amusement park locating in the same area.

Officially named the Beaver Creek and Grayling Township Utility Authority, the townships completed a pre-application for a Michigan Economic Development Corporation grant, and qualifies for a United States Department of Agriculture Rural Development loan to help pay for the water and sewer lines.

The water and sewer project are expected to cost about $8 million, and will include a road from the plant to the city’ industrial park. The waste water treatment plant, owned by the City of Grayling, will need to be expanded to accommodate any additional businesses that will tap into the lines.

The authority borders expand into the Grayling Township Industrial Development Park. Due to the memorandum, another 1,200 acres of land are available for purchase from the DNR. To that end, Grayling Township, the DNR and the Crawford County Economic Development Authority have combined efforts to take advantage of the expansion by marketing the entire county, on top of the local promotional efforts by the townships and City of Grayling.
Harland said when people and municipalities get together, there can be a real synergy and effort to get things done.

‘This is proof of what happens when you work together,’ he said. ‘I’m pretty excited about it. If we do things right it affects the entire region.’

He said the ARAUCO development, and others that may follow, will create a significant opportunity to develop hundreds of quality, full-time jobs, something the area has been lacking for decades.

‘A lot of this stuff has been discussed for years,’ Harland said previously. ‘What we hear is how we have great schools. How well we educate our children. And although some kids may go off to college, others who want to stay here but can’t because they have to leave to find a decent paying job.

‘This will be a boom to Crawford County and the region at large.’

‘It speaks positively of a real collaboration between the state and local governments. We can all take pride in this investment in Grayling and Crawford County,’ he said.

Gibbon said the reception in Grayling has been outstanding.

‘When our company president came here and started to meet with people he was impressed,’ Gibbon said. ‘He said, ‘Can we move our entire company here?’

‘Everyone I’ve met in Grayling the last month have been just terrific. The people and the community have been very welcoming. We’re looking forward to being a good citizen of the community.’