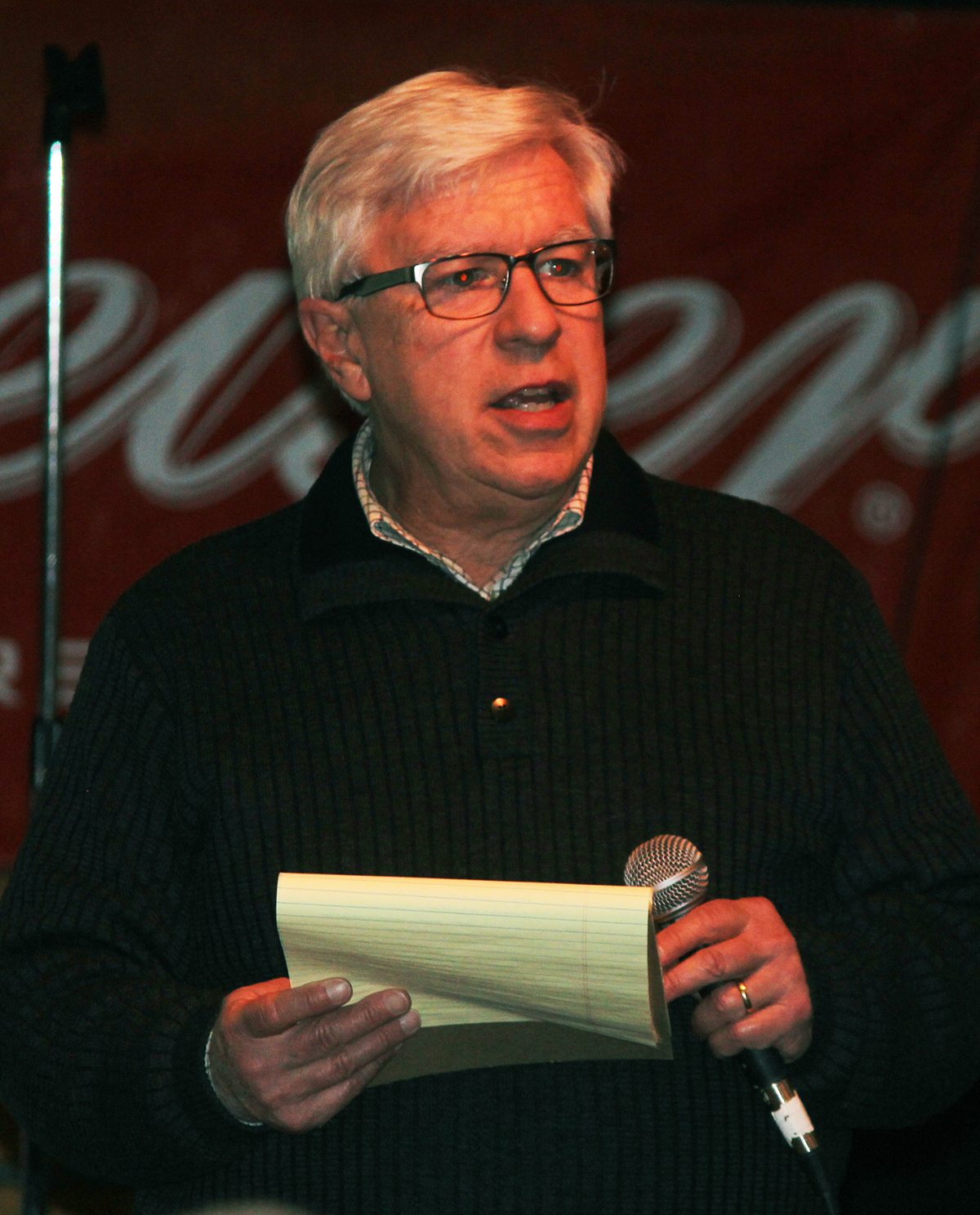 GRAYLING – The controversy over a permit issued by the Michigan Department of Environmental Quality (DEQ) to allow the Grayling Fish Hatchery to increase its capacity by more than 600 percent without waste treatment has prompted a groundswell of local opposition. And now a formal decision will be made.

Conservation and fishing organizations on Friday provided final testimony to an administrative law judge showing the permit issued in 2014 to allow an industrial scale fish farm to operate would open the door to pollution and degradation of Michigan’s premier trout stream.

The judge will make a recommendation to DEQ Director Keith Creagh, who will make the decision as to whether the permit will stand. Anglers of the Au Sable called on Creagh to withdraw the permit and halt the hatchery’ operations.

Creagh replaced Dan Wyatt, who resigned after a state task force found the DEQ responsible for the Flint water crisis, in which a state-appointed emergency manager made the decision to allow untreated water to be drawn for use by city residents from the Flint River, causing lead to leach into the water supply system.

Anglers of the Au Sable President Tom Baird hopes the state opts to protect the river.

‘Gov. Rick Snyder has said one of the lessons learned in the Flint water contamination disaster was that state regulators focused on ‘technical compliance over common sense,” Baird said. ‘This permit seems to be a good example, with the (DEQ) issuing a permit that common sense says will allow pollution levels that will harm the river fishery and the Crawford County economy, which is built on the river’ clean water. And we provided evidence that the permit does not even meet technical compliance with state laws and regulations.’

Baird said the organization is not opposed to the expansion of development of the hatchery.

‘We are not opposed to the development of an environmentally appropriate hatchery near the river,’ Baird said. ‘The state’ Platte River Fish Hatchery shows how that can be done. This permit, however, fails to meet the standards that must be upheld to maintain the world-class fishery on the Au Sable and the county economy that relies on that fishery and a clean river.’

During the three-month hearing leading up to the most recent decision, Anglers of the Au Sable and the Michigan Sierra Club provided 27 witnesses and 4,000 pages of evidence to explain the current permit for Harrietta Farms, located on East Branch of the Au Sable River in Grayling, should be withdrawn.

In May 2012 Harrietta and the Crawford County Board of Commissioners signed a 20-year lease to operate the hatchery as a commercial fish farm. The permit allows the hatchery to increase the number of fish produced from 20,000 to 300,000 pounds annually, increasing the amount of phosphorus and waste in the river significantly.

On a local level, more than 100 people turned out for a March 22 event at Tinker’s Junction in Grayling to bring together the Anglers and Harrietta Hills owner Dan Vogler.

Vogler insisted he is just an environmentally responsible businessman trying to make a living.

There was a common theme among the variety of questions asked at the event: Why risk the health of an internationally renowned river for what will potentially cause a net loss in jobs and harm the economy; and why isn’t Harrietta willing to end the controversy by treating the waste prior to allowing it to flow into the river.

Vogler said he is unwilling to invest any money into equipment to capture the waste prior to the settlement of the lawsuit. But nothing in the permit requires him to conduct any treatment other than those specifically detailed in the permit.

One audience member asked who is responsible if the river is harmed by the operation. Vogler said he will be personally responsible if he ‘breaks’ the river, and is subject to substantial fines. He also noted that his business is formed as a Limited Liability Corporation (LLC), which in part protects personal assets in the event of an accident.

Vogler said he is going to employ two-full time jobs and two part-time seasonal jobs at the hatchery. However, according to an economic study done by Dr. Frank Lupi, a natural resources economist from Michigan State University, the pollution from the hatchery could cost about a dozen jobs across the entire AuSable River Watershed, and up to $4.5 million in lost tourism revenue.

Testifying on behalf of the Anglers at one of two formal public hearings, was Josh Greenburg of Gates AuSable River Lodge. Greenburg said in an earlier interview that the health of the river is critical to the success of his business, as well as many others. He said the reputation of the ‘Trophy Waters,’ a stretch of the upper part reserved exclusively for fishing only, is what draws people to the region.

Greenburg said the lodge has hosted fisherman and their families from every state, as well as England, Japan, Norway, Germany and Spain.

‘The simple thing about resource-based tourism is it just keeps producing jobs and being healthy at the same time. That’ the beauty of it. The resource generates many millions of dollars every year and all we have to do is take care of it and protect it,’ he said.

Since the topic combined water and the DEQ, the Tinker’s Junction conversation appeared destined to turn toward the Flint water crises, where the DEQ withheld information from the public about lead contamination of the city water system.

An unidentified man in the back of the room yelled, ‘I’m from Flint. I don’t believe anything the DEQ has to say.’

Vogler countered that if every DEQ permit in the state were rescinded, business in Michigan would grind to a halt. The audience burst into applause at the comment.

“I can’t defend their actions in Flint, but Flint and Grayling are not the same place GÇª It’ not same permit,” he said.

Among the key pieces of evidence put into the hearing by Anglers:

GÇó The river already has higher algae growth below the hatchery than elsewhere, an indication that both nitrogen and phosphorus enrichment is occurring due to hatchery operations. Increasing fish production at the Grayling Fish Hatchery will facilitate even greater algae growth below the hatchery in the East Branch, and also in the Mainstream, including the world famous ‘Holy Waters’.

GÇó The river below the hatchery already has the intermediate host for whirling disease, which infects fish and has seriously damaged other fisheries nationally. The host will increase in abundance with the addition of organic sediments from the hatchery, increasing the probability of an outbreak, a potential disaster for the river.

GÇó Water sports of canoeing, kayaking and floating are expected to be affected by degradation in water quality. That would mean an estimated loss in economic value to watersport recreation users of about $422,000 per year and lost impacts to the regional economy of about $880,000 per year.

GÇó The economic contributions likely to stem from production expansion are uncertain and likely to be small for many reasons. The expansion will add few jobs (two to three) to the regional economy. The bulk of the economic gains from the use of the public resource will accrue to a handful of private individuals.

Baird noted that the fight to protect the river is never-ending.

‘Anglers are proud to stand up for the river, its fishery, and its future. It’ a long tradition with our group,’ said Baird. ‘We have successfully protected the Au Sable River from excessive water withdrawals, oil production pollution, over-logging and abuse by various groups.

‘We are confident the director of the DEQ will see the error of issuing this permit and rescind it.’

Baird noted the legal action fighting the permit has been expensive for the Anglers. He asked that if you would like to financially support the efforts of the Anglers please visit ausableanglers.org.

~ David Waymire and Mark Constance contributed to this story