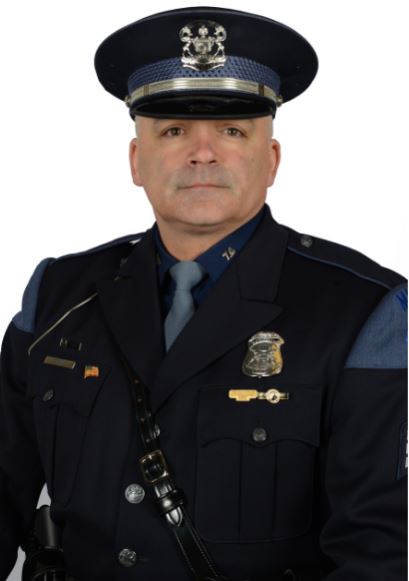 OTSEGO COUNTY – Ann off-duty trooper is credited with saving a Royal Oak man who was stranded on a two-track in Chester Township.

Sergeant James Bush is assigned to the Michigan State Police (MSP)
Gaylord Post.  He was off duty last night, October 31, 2019, when he received a telephone call from his
wife at approximately 9:00 p.m. She was returning home from handing out candy at a Halloween event at
their church in Lewiston. She informed her husband there was a vehicle stuck off the roadway on Bass
Lake Landing south of Bass Lake Trail in Chester Township with footprints in the snow.

Sgt. Bush loaded
up his personal truck and drove out to the scene where he observed footprints leading away from the
vehicle. A dog and cat were left inside the vehicle.
Sgt. Bush followed the tracks and located the driver, a 79-year-old male from Royal Oak, on a two-track
east of the main road where he was slumped over kneeling in the snow with slurred speech and not
wearing any shoes.

The man could not stand. Sgt. Bush picked him up and helped him out to the main
road. He placed the elderly man into his truck. The man was disoriented and did not know which
direction his cabin was. The man began shivering uncontrollably once he started to warm up.

Sgt. Bush called 911. Otsego County EMS arrived along with troopers from the Gaylord Post and MSP
Chaplain Norm Oberlin. Sgt. Bush moved his truck to the ambulance door and the man was transferred
to the ambulance. Once inside, after about 30 minutes warming in Sgt. Bush’s truck, EMS workers
obtained an internal body temperature of 92 degrees and the man was transported to the hospital. The
79-year-old later advised he had been in the snow since around 7:00 p.m.

Chaplain Oberlin attempted to start the vehicle to warm up the animals and advised that the vehicle’s fuel
tank was empty. If it were not for Sgt. Bush’s wife’s call and the fast response of Sergeant James Bush,
the outcome may have been different.


To submit information for publication, or for questions regarding promotion of your business, please email mconstance@UpNorthVoice.com , or call 989-275-1170.