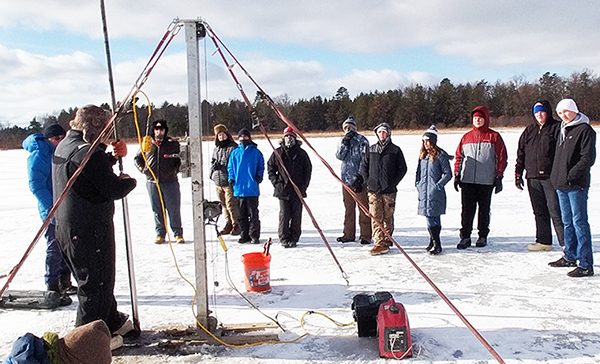 The working hypothesis of this ancient glacial lake is that local bodies of water such as Houghton Lake, Higgins Lake, Lake Saint Helen, Backus Creek Lake (flooding), and Robinson Lake, are modern day remnants of this paleo-glacial lake and scientist are hopeful they will find clues in their deposited lake sediments that could make Glacial Lake Roscommon the oldest glacially formed lake on the North American continent. The students visited the team while they were taking lake bottom sediment cores through the ice on Robinson Lake.

The research team consisted of:

Anna Schartman watches the bottom of Higgins Lake during the coring.

Dr. Schaetzl greeted the students and introduced them to the objectives of the study area and how it pertained to Glacial Lake Roscommon. Each team member introduced themselves and described their specialty and role in the project.

Dr. Lowell explained to the students how the Livingston corer worked and only sampled a meter of sediment at a time. The pipes attached to the core recorded the depth of the corer in the sediment and then when he was at the right depth for the next sample, he would release a piston that would move up that was originally blocking the core tube, so a sample could be taken at the next required depth.

Dr. Larson had Caleb Jacobs ice auger a bore hole so cores could be taken. The students observed the operation of the coring rig and the team extracted a sediment core to examine and catalog.

Dr. Catherine Yansa and Albert Fulton unloading the truck before venturing out on Higgins Lake to assist in the coring.


Dr. Yansa explained to the students how the sections from the core to be sampled and analyzed for plant fossils had to be treated with a series of acids (hydrofluoric acid to remove silica, hydrochloric acid to remove lime or carbonates, and sulfuric acid and organic solvents to remove lignin-the “dark wood matter”) so the micro fossils and pollen grains could be analyzed and be more transparent under a microscope. She also told them that the core is cut length-wise and only half the core is studied at MSU and the other half is deposited in a refrigerated sediment core repository in Minneapolis, Minnesota.

Since a glacier use to be here, she said they hope to find plant fossils more related to the tundra type environments of Alaska or boreal forests of northern Canada.

Dr. Lowell walked the RHS students over the ice to the shore and explained how the environments they were walking over have characteristic sediment material and grain size. Silt and clay were indicators of deeper, lower energy water, woody plant material and fine sediment that would be indicators near shore environments were the sedges were growing now, and coarse sand would indicate shoreline (higher energy environment) and land beyond the lake. He told the students what they just experienced walking horizontally across the land, is what is recording vertically over time in a sediment core. So, if at a bottom of a core you found coarse sand, followed above it by plant material and silt, then by fine silt and clay; that would indicate over time the water level of the lake increased in depth.

The plant fossil sediment or organic layers in the core deposits will be specifically sampled and sent to a lab a radiocarbon dating lab at the University of California Irvine. This will give the scientists more set timeline to reconstruct the environment against. The sample preparation for this will be done by Dr. Curry of the University of Illinois.

The students got to interact with the scientists and ask them questions and watch them drill and characterize/catalog more cores. Since the organic matter (plant material and black silty-clayey ooze) of the core did not go down that deep in Robinson Lake, its lack of deep water over time would not make it a good candidate to get older information on Glacial Lake Roscommon, so the coring rig was torn down and packed up.

The RHS students went back to school, while the research team went to the Backus Creek flooding area. There they got over four meters of good sediment material at the Backus Creek Flooding area, making it a better candidate for being an older vestige of Glacial Lake Roscommon.

The next day, Jan. 19, the research team went to Higgins Lake to take cores. The scientists plan to come back at the end of February to do more coring once they have had a chance to analyze their data to see if more coring needs to be done in the areas they sampled, or if other new areas to be sampled would be the better alternative to do.