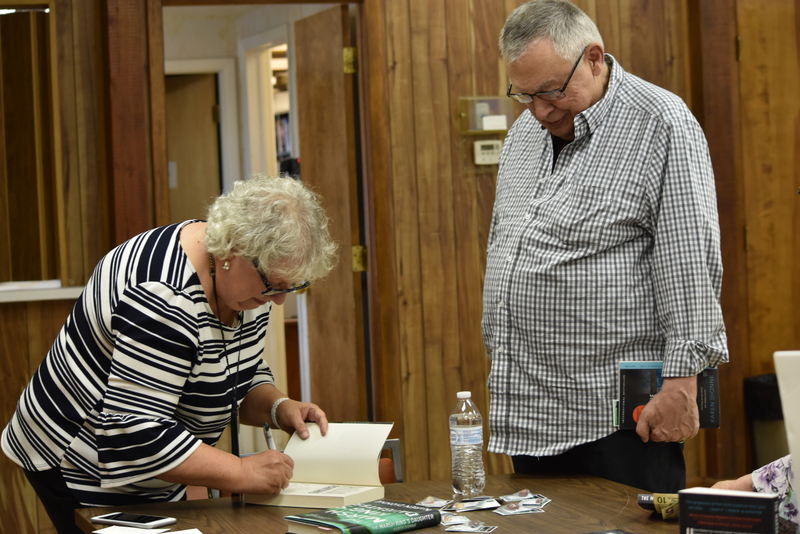 The Library of Michigan selects up to 20 titles that ‘speak to our state’s rich cultural, historical, and literary heritage and proves without a doubt that some of the greatest stories are found in the Great Lakes State.’ Dionne shared her writing process by saying ‘I woke up in the middle of the night with the first two sentences of the book in my head and I repeated them over and over so when I got up in the morning I could put them down on paper.’

After explaining how she wrote the book to getting it published, and becoming an international best seller, there was a lively discussion of the main characters of the book. At the end of the program she autographed individual copies. On her current tour she has copies of the book in Spanish, Polish, German, Norwegian and Portuguese. They are given away to anyone who reads the language.

In her biography Dionne is described as the co-founder of the online writer’ community Backspace and organizes the Salt Cay Writers Retreat held every other year on an island in the Bahamas. She is a member of the International Thriller Writers, where she served on the board of directors as Vice President. She enjoys nature photography and lives with her husband in Detroit’ northern suburbs.

A synopsis of The Marsh King’ Daughter says, ‘When the notorious child abductor, ‘The Marsh King,’ escapes from prison in Michigan’ Upper Peninsula, Helena Pelletier is sure she can use the skills she learned as a child to find him. No one is The Marsh King’ equal when it comes to navigating the marshland – except Helena herself, his daughter. As their cat and quarrygame unfolds, she must use all her wilderness skills to thwart his plan and survive it.’

Passed Away On Friday February 26, 2021 At Home With His Loving Family By His Side. Robert was born on July 22, 1932 in Lansing,...
Read more
Roscommon Features

ROSCOMMON - On July 22, 2018 Messiah Lutheran Church of Roscommon has passed yet another milestone. We have been blessed to pay off our...
Read more
- Advertisment -