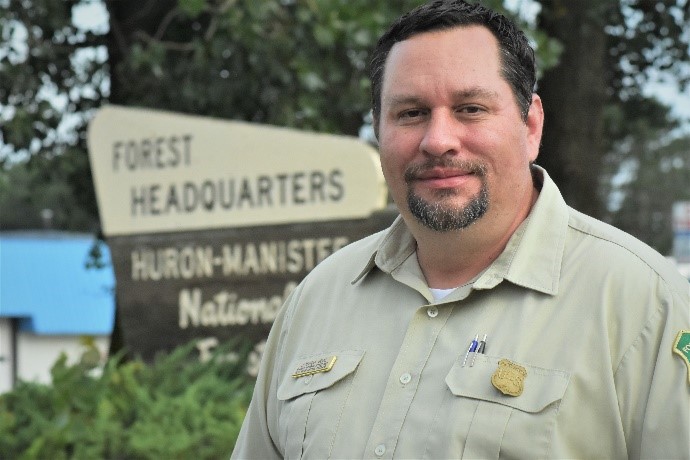 CADILLAC — The USDA Forest Service is pleased to announce the addition of Joshua Veal as the new Public Affairs Officer for the Huron-Manistee National Forests.

A native of East Tennessee, Joshua grew up exploring the southern Appalachian Mountains around Tellico Plains with his papaw Eugene Veal, who took him hunting, camping and fishing often, and instilled in him a love of the land that continues to this day.

In 2001, Veal worked as a wildland firefighter on the Cherokee Hotshots in Tennessee and later as a recreation technician on the Tellico District of the Cherokee NF, before accepting a Fire Prevention Technician position on the Modoc NF in far northeastern California. He was promoted to Battalion Chief for the Goosenest District of the Klamath NF, then later moved to the Klamath NF supervisor’s office serving on the Fire Staff as the Fire Prevention Officer, and more recently the Forest Public Affairs Officer on the Klamath NF.

“He brings a unique set of skills and diverse experiences to the leadership team with a keen understanding of natural resources and the management of public lands,” said Forest Supervisor Leslie Auriemmo of Veal, adding “With his background in wildfire, he has an understanding of the need for the integration of wildfire safety and can assist us with building strong community relationships as part of a robust public affairs program.”

“I look forward to meeting my new community and creating lasting relationships. I have often found that the best listeners make the best communicators. Being able to work with our public visitors using effective communication on how to help us conserve our public lands is my favorite aspect of the Public Affairs Officer position,” Veal said.