The Steiner Museum of Oscoda County 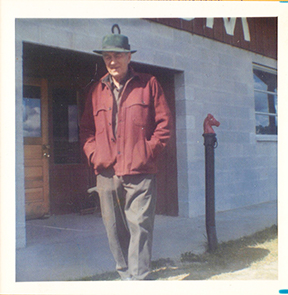 FAIRVIEW – Some may know, and others may not, but Oscoda County has a little hidden gem known as the Steiner Pioneer and Logging Museum just North of Fairview.

The museum originally was the brainchild of Earl Steiner and his interest in collecting. Earl came to Oscoda County in 1907 when he was just a small boy. They were part of a group of Mennonites that made the journey north to settle and start a new life.

Early in his life Earl became a collector of logging, railroad and items of early pioneering days. His collection grew and locals would come to his home to see him and his collections of various artifacts. Earl’s knowledge of his collection was very great and when he would give tours of his collection, he could in detail explain what each item was and what it was used for.

Over time the collections continued to grow, and with it, a need to expand the space to hold it. With the help of some local business men, a building was erected to house his growing collections. Then in 1968, the Steiner Museum was officially opened. After the opening of the museum, the old log North Fairview schoolhouse was moved to the museum.

The schoolhouse was originally built in 1885 and for many years was abandoned until it found a new permanent home at the museum. In February of 1979, Earl Steiner passed away at the age of 77 years. The museum was under private ownership after his passing but was still open to the public from time to time.

Then in the early 1990’s, the museum came into some legal troubles. The museum and all of the contents inside were almost going to be auctioned off to the public. Many local concerned citizens came together and asked the county and the six townships within to purchase the museum.  And since then, the museum has belonged to the citizens of Oscoda County.

Over the years, the museum has added on a few additions and outbuildings to house the continued growing collection of artifacts the museum receives. Currently there are many newly acquired artifacts housed in off-site locations due to a shortage of space in the museum. This year, a large addition to the south end of the building is being planned for construction this summer.

The opening season for the museum starts the Saturday before Memorial Day with a pancake breakfast at the museum. The breakfast starts at 8 a.m. and lasts to 11 a.m.

The Steiner Museum is open on Saturday and Sunday from noon to 4 p.m. and is located at 1980 Reber Rd., just two miles north of Fairview in Oscoda County. The museum is non-profit and operated by volunteers on the board of the Oscoda County Historical Commission and the Friends of Steiner Museum.