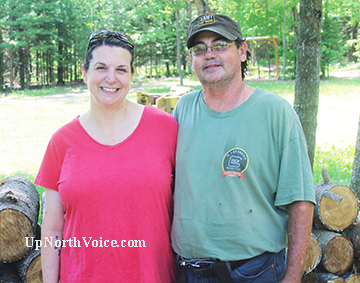 
MIO – Danny and Erica Dagues have their own little slice of Heaven.

But living “off the grid” can be difficult. Lack of direct power. Hand hauling of water. Heating with firewood. All are legitimate issues, especially when it comes to the physical part of the lifestyle.

Dan has several health issues which have been causing him concern, according to Erica. That was part of the reason the crew from “Homestead Rescue” stopped by Northeast Michigan to help.

According to the Discovery Channel website, “In the last decade, two million Americans have attempted to leave behind civilization in favor of life off-the-grid, but most have failed. For the hundreds of families who decide to become homesteaders, the learning curve is a steep one. On Homestead Rescue, struggling homesteaders across the county are turning to expert homesteader Marty Raney – along with his daughter, Misty, a farmer; and son, Matt Raney, a hunter and fisherman – to teach them the necessary skills to survive the wilderness. The stakes are high, but the Raney family is determined to prepare these families for nature’s worse and set them up for success. Each family faces the ultimate decision: Will they tough out their first year? Or pack up and return to civilization?”

Becoming part of the program is not easy.

“We have so many people who want to be part of the program,” said Matt Raney, Matt is the son of Discovery Channel Icon, Marty Raney, who visited Oscoda County with Matt and his sister, Misty, last Fall.

But the vetting process is thorough.

“It’s not preplanned,” he said. “There is no grand plan.

“Everyone has input in vetting from the guys at Discovery to us. It’s just one massive filter. And when someone is passionate about a family, they need to make a case for them. That they are worthy of the time being spent.

“The process of picking those families is a full-time job.  They are out every day trying to find new people. It’s actually a massive task.”

Marty Raney said Dan and Erica are indicative of many of the people he has met in Northern Michigan.

“That particular couple was amazing,” Marty said. He has some extremely serious health issues. They are very deserving. When I see people like them that I’m that much more motivated. Makes it more engaging and entertaining. To me he really represented that “Michigan get it done” attitude. Don’t complain and just do what you have to do. I really liked that guy and his wife. They have been stuck in my head ever since we were there.”

Danny said the group of people who came to their home were amazing.

“They had people here from the U.K., England and the U.S. It was just an awesome group of people,” he said.

Erica said the Raney family and Discovery did so many things for them.

“I am so thankful. They just changed our lives,” she added.


Editor’s note: Due to contractual obligations, the location of the home, names of local contractors, types of work done on the property, and photos on site, the complete story can’t run until the show is broadcast on television. The story can be read in its entirety at that time at www.UpNorthVoice.com . The next Homestead Rescue show can be seen on the Discovery Channel on July 3.

The episode involving the Mio family (along with one other) has been postponed as of July 2.

Joyce Clark of West Branch is an avid follower of the show, and facilitated the interviews with the Raneys, as well as Danny and Erica Dagues.