Gate’s Lodge and the ‘Holy Waters’ 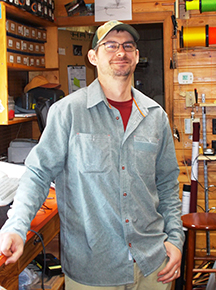 GRAYLING – The AuSable River, fly fishing and river conservation have been a part of Crawford County history for over a century.

About the same time as the lumber industry was transforming from big timber into pulp wood harvesting, Americans returned from the wars in Europe with knowledge that a fluff of fur or yarn wrapped around some feathers and a hook can entice a sophisticated trout to mistake it for dinner.

The sport of fly fishing took off and the streams that once floated millions of feet of pine to the sawmills, became hosts to sportsmen intent on stalking the silvery ghosts of the cool, crystal pools and rapids of the north country’s rivers. One of the causalities of the lumbering era was the Grayling, a beautiful, iridescent member of the Char Family of fish, whose firm flesh carried a hint of thyme. Habitat changes and greed doomed the Grayling in the AuSable river system and the Brook Trout, introduced by Rube Babbitt in 1885, took its place.

It’s impossible to understand the history of fly fishing on the AuSable without examining the history of Gates Fishing Lodge and the Gates family. It has been their passionate influence on the river and its tributaries over nearly half a century that has elevated the upper reaches of the AuSable River to its status as one of the premier trout streams in the United States.

In the early 1970’s, Calvin and Mary Gates retired as music teachers in Oscoda, moved to Grayling and purchased a riverside bar and restaurant on Stephan Bridge Road called “The Canoe Inn”.

The original lodge was purchased from the Borcher Family. It was a local spot that offered drink, food and a few overnight cottages with a view of the river. It was also a favorite watering hole and rest stop for folks canoeing the river for either fun or fishing.

Renamed “Gates Lodge”, Cal and Mary expanded the operation with more rooms and a small fly shop that consisted of a single show case of flys. Cal was an avid fly fisherman when fly fishing was first becoming popular in the United States. He recognized the AuSable River watershed and the potential it held for a premier trout stream.

Born in 1955 and a teenager when they moved to Grayling, Cal’s son Rusty, was as thrilled with fly fishing as his father and soon became an excellent fly fisherman and expert river guide.  Rusty started tying his own flies at an early age and developed several patterns specifically imitating the AuSable River hatch’s and giving them names like the “Rusty Spinner” and the “SRB” (Secret Rubber Bug).

Rusty and his wife, Julie, purchased the Lodge from Rusty’s mother, Mary, after Cal passed on.  They had been running the lodge since Cal retired in the early 1980’s.

Gates Lodge is located on a stretch of the river known as the “Holy Water”.  It was so named by Cal out of respect for the perfect habitat it contains for reproduction of trout with its swift, cool waters, deep pools, undercut banks and gravel bottom.

Rusty and Julie built the Lodge into a fourteen unit, four seasons fly fishing destination.  They offered professional guide service, a fully equipped fly shop and a full restaurant offering three meals a day.  Fishermen setting out on a float trip may even order box lunches to take out.

However, the real history of Gates Lodge lies with the legacy of river preservation.

Rusty was considered by many as the guardian angel of the river.  In 1987 Rusty formed a group called “The Anglers of the AuSable” which has grown to a membership of over 900 members from all over the world.

Many of the members are from the “legal community” and when a threat to the quality of the waters is recognized they spring into action. The Anglers operate a continuous water quality sampling effort to provide early warning of potential contamination.

When oil companies wanted to drill on the South Branch, the Anglers efforts stopped them from polluting the river. They are constantly raising money for stream improvement projects. The annual river clean-up attracts hundreds of volunteers that wade the Holy Water from Burtons Landing to Wakeley Bridge and along most of the AuSable watershed basin, picking up trash every fall; something they have been doing for almost thirty years.

In an interview granted by Rusty the year before his passing he commented, on the variety of objects and materials that were typically collected from the river during the river clean-up.  The first two or three years they collected over ten cubic yards of trash including beer cans, sandals, rubber tires, canoe paddles and even most of the parts of a “Model A Ford”. Since that time the quantity of trash has been reduced to the point where the teams only need spend a couple of hours covering their assigned areas.

Rusty Gates passed away in December of 2009. The legacy, the history of stewardship, that Rusty brought to the river through Gates Lodge and the Anglers of the AuSable endures.

Rusty’s longtime friend and general manager, Josh Greenberg, continues to run Gates Lodge and propagate the conservation philosophy established by the Gates family. A few years after Rusty’s passing, Josh purchased the Lodge from Cal’s wife Mary. Josh and his wife Katy, continue as hosts, members and supporters of the “Anglers of the AuSable”.

When asked about the relationship between the AuSable River and Gates Lodge, Josh was quick to respond that it “is the river that made the lodge, not the other way around.  For those familiar with the AuSable, be it through a love of the fly fishing purist or as a canoe paddler just enjoying a float through unspoiled nature, Gates Lodge has played a large role in making the river what it is today.

A pleasant evening sitting on their porch or enjoying a meal at their convenient restaurant overlooking the water, is all it takes to begin to feel the wonder of the AuSable river.  A special thanks, on behalf of the Crawford County Museum, to Josh Greenberg for providing his time to share the information that allowed for this story to be brought to you, our readers.


To submit information for publication, or for questions regarding promotion of your business, please email info@UpNorthVoice.com.