HomeFeaturesA recipe for everything
Features

A recipe for everything 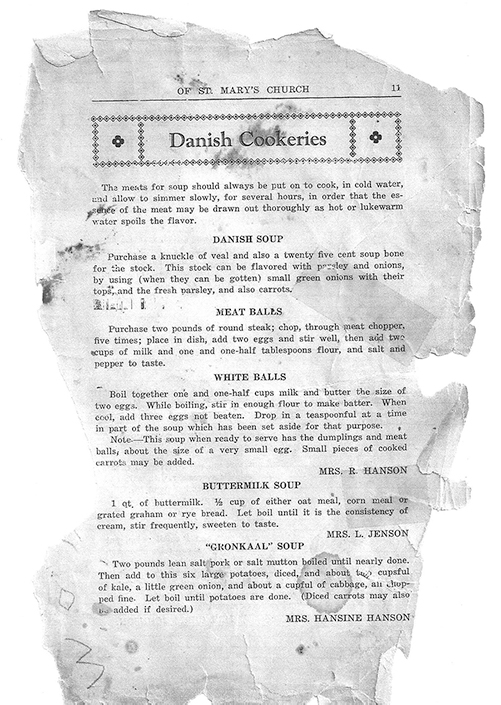 “A Recipe for Everything”

GRAYLING – One of the documents housed at the Crawford County Historical Museum is an old, tattered cookbook.

The front cover and first six pages are missing and the paper is yellowed. According to the title across the top of the pages the recipe book was put out by “The Ladies of St. Mary’s Church”.

On first inspection the book would appear as most cookbooks put together by various groups and organizations as fund raisers or similar projects. Not much is known about this publication, however, based on the names of the contributors, the recipes included and the ads of supporters of the project, it was published in the early nineteen hundred in Grayling. In addition, the only St. Mary’s Church anyone can remember in Grayling is the Catholic Church which raises an eyebrow because so many of the recipes are Danish and the majority of the early Danes in Grayling were Lutherans.

The best guess is that this cookbook was a project of the Catholic Church but, Grayling being a small community at that time, all church’s and other community members were invited to contribute which provides us with a truly eclectic view of the early community menus.

Upon closer examination the cookbook provides a vivid insight into what our early life styles were like, based on what we ate about one hundred years ago. As with most cookbooks this one contains a section on measurements and conversions, but how many modern cookbooks contain a table of recommendations for serving gatherings of fifty people?  This harkens back to the days when organizations put on dinners that attracted most of the community or preparing and feeding lunch to the harvest crews that assembled to help each other gather the crops. It also probably helped the cooks in the lumber camps to feed the lumberjacks.

The mid-day break was an essential part of the fall harvest or in the lumber camps. They worked hard starting at dawn and the ladies and camp cooks started just as early to prepare the food for the lunch.  They all worked together, moving from farm to farm until all the crops were harvested or to be ready for the lumbermen when noon break arrived. Most of the recipes use high calorie and carbohydrate ingredients to provide the energy required by these rigorous jobs.

The recipes were telling in the type of food that was cooked. Many the early settlers in Crawford County were Danish and the recipe book reflects that in many of the recipes offered.

Another section contains recipes for “Danish Meats.” Frikadeller was a dish made with either round steak or pork ground up with other ingredients, including lots of suet. The mixture was rolled into balls and fried in hot lard.  Both Mrs. T. Boesen and Mrs. N. C. Nielson submitted recipes for this dish.  Another dish, submitted by Mrs. Nels Olson was called “Applesflaske”.  It was apples, peeled and sliced, fried up in bacon grease and served hot, sweetened with sugar and on a bed of crisp bacon.

The chapter on “Danish Pastry’s” is so loaded with calories that a current day dietician would probably suffer apoplexy just reading the recipes. A good example is a recipe for something called “Kringler’s” submitted by Mrs. E. Niederer. It includes one cup sour cream, one heaping cup butter flour and other ingredients shaped into strips twelve inches long and twisted like a pretzel.  It’s dipped in sugar and baked.  Sounds fantastic.

Mrs. J. W. Sorenson includes a recipe for Swedish Sprit-Bakelser which requires an ingredient called “salts of hartshorn”. Try buying that at the local super market.

In addition, the cookbook includes a section on “Danish Hors’D’Oeuvre’s”.  Most of these were submitted by a Mrs. H. W. Wolff.  They all look very appetizing.

It appears that there was a lot of local merchant support for this project by virtue of the advertising content included in the publication.  Drs. Keyport and Clippert had a one-half page ad complimenting the ladies on their project.  Hanson’s Café indicated they were open day and night in a one quarter page ad.  Mr. Wm. H. Moshier advertised his “Willis-Overland Automobile” Sales and Service.  His phone number was “47”.  Comparing that number to your own cell phone number makes one wonder.

The folks that offered recipes for the book include well known Grayling names like McNamara, Clippert, Hanson, Rasmusson, McLeod, Larson, Kraus, Bobenmoyer, Hartwick, Behlke and Sister Mary Ellen.  There were many more ladies that shared their secrets for this cookbook, too many to name, but these are cooks that lived the transition between the early days of lumbering and farming and the industrial revolution and they lived in Grayling.

Along with a storehouse of unique and ethnic recipe’s the cookbook contained several “pearls of wisdom”.  The first page of the “Cookies and Doughnuts” section, under a title of “Briefly Told”, offers the following:

The difference between the optimist

And the pessimist is droll.

The optimist sees the doughnut,

And the pessimist sees the hole.

This cookbook is “fun”.  It pre-cedes the days of prepared food and box mixes.  It reverts to a time when things were made from “scratch” and most every woman was an artist in the kitchen.  Ingredients were natural and fresh.

Butter, suet and lard were considered healthy and required components of good food.  This was before the days of high blood pressure and cholesterol, but we seemed to survive, probably due to a more active life style.  All other considerations aside, you will get hungry just reading the recipes.

Stmarys 23:  With these selections Mrs. Wolff must have been a remarkable hostess.

Stmarys34:  Does anyone remember where this restaurant was located?

Stmarys43:  The phone number in this ad suggests a simpler time.

Stmarys48:  The recipes on the back of modern cake boxes aren’t nearly as informative as this.

Stmarys 53:  If anyone tries this recipe, let us know how it taste’s.