Pine stumps: More than one way to extract a profit 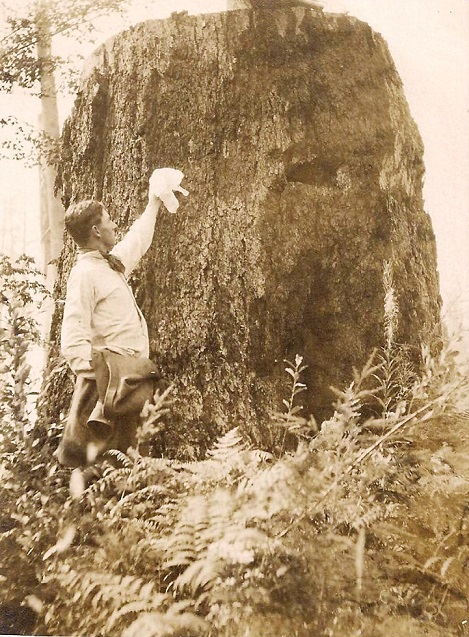 Huge stumps are all that remains of a virgin forest left for waste. They prove as valuable as the rest of the tree.

Pine stumps: More than one way to extract a profit

With the completion of the harvest of red pine, cork pine and hardwoods across northern Michigan, all that remained were stumps, four-foot-high and as far as the eye could see.

But some folks saw profit in this refuse. In 1906 chemist Karl A. Haulter settled in Grayling and in 1909 he established Crown Chemical Company. Using processes that Haulter invented the stumps could be inexpensively processed to produce as many as 32 different products, chemicals and medicines.

The process started by shattering each stump with massive charges of dynamite. Using dynamite was faster and cheaper than sawing and splitting the four-foot logs into shreds.  Once reduced to splinters with a machine called a “Hog”, the splinters were loaded into special “trough shaped” carts and wheeled into steam heated ovens called “retorts”.

Heated to 300 degrees centigrade the wood gave off vapors that were captured and run through a distillation process. As the vapors cooled, different products were captured with the largest quantity being turpentine. Following as the temperature dropped were chemicals like wood alcohol, acetone, pine oil, creosote and acetate of lime.

The original Crown Chemical Company was located near the site of the Grayling Airport and was the first of many such operations that opened in other locations in Michigan, Wisconsin, Washington State and Oregon.

In 1915, the DuPont Chemical Company of Wilmington, Delaware became aware of the process and the potential profits and decided to join the industry by acquiring a large tract of land lying between US 27 and east across the current I-75 Expressway into what is now Grayling’s Industrial Park.  DuPont started operations in the plant in 1917 rapidly increasing to full operation the following year.

DuPont relied mostly on Beech, Maple, Tag Alder and other hardwoods as opposed to the pine stumpage favored by Crown Chemical.
Their primary operation was focused on the creation of charcoal.  The vapors developed in the “roasting and carbonizing” process were collected and distilled, again producing a similar inventory of chemicals as created in the Crown Chemical Company operation.
Most of the products produced in the stumpage operation were shipped to other DuPont plants for further processing into other products. The charcoal produced, in excess of that required for the heating of the boilers, was turned into black gun powder, smokeless gun powder and dynamite.
In addition, during 1917 and 1918, thousands of gallons of wood alcohol were shipped to Japan and England. During this period, DuPont was in operation 24 hours per day, seven days a week, and employed from 200 to 350 men in the plant and about the same number in the woods collecting stumps. Any man who wanted to work double shifts was welcomed to do so. Work was plentiful and the factory pumped up to $90,000 of payroll into the Grayling and surrounding area economy every two weeks.

This process was refined to the point that one cord of stumps weighing 3,300 pounds going into the retorts, came out reduced to 300 to 400 pounds of remaining wood. From this process came an average of 20 gallons turpentine, four gallons of pine oil and 40 gallons of pine tar, plus all the other smaller quantities of chemicals so useful to industry and medicine.

According to the May 23rd issue of “Iron Age” magazine, Crown Chemical closed its doors on the Grayling operation in 1912 moving everything to Cheboygan, which was closer to the remaining supply of pine stumps.  By 1923 the cost of transporting the pine stumps greater distances became prohibitive and by 1925 the DuPont plant was shuttered and sold for salvage.

It is interesting to note that a major chemical industry, feeding on the scrap of another industry, could be born, generate such huge profits and disappear from the scene within a 15-16-year period.  All the remains today are memory’s and some words and photographs.

This information has been gleaned from documents in the Crawford County Museum.  If the reader wishes to discover more about this subject, stop by the museum in the spring and delve into its archives.