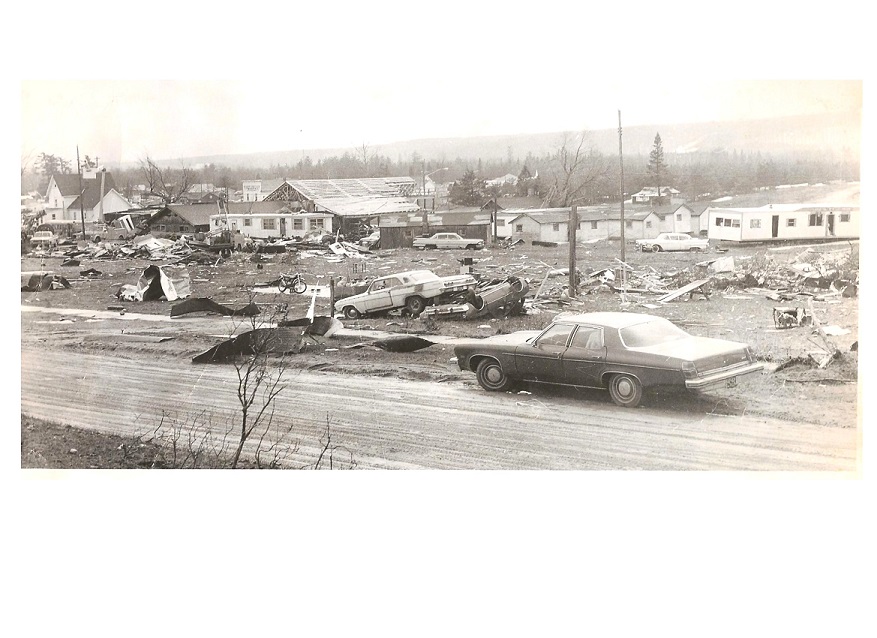 FREDERIC – Frederic was settled in 1877, three years after Grayling was founded as Crawford Station.  Frederic was originally known as Forest and then Fredericville and was a “wooding-up” stop for the wood fired logging locomotives.

The rail-route that opened the virgin cork pine forests ran from Saginaw to Gaylord passing through Frederic. As the logging industry grew, small settlements, like Frederic, expanded into towns as spur railway lines were laid down to facilitate the transport of logs to the mills.  Many of these settlements had sawmills or were close to milling operations.

One of the earliest settlers in Frederic was Judge Wellington Batterson. Judge Batterson influenced much of Crawford County history. According to the Batterson family history, the Judge arrived in Crawford County in 1878. He cleared about 30 acres south and west of Grayling and successfully raised wheat, corn, potatoes and some red clover.

In 1894 Judge Batterson moved to Frederic relocating his farming operations due to some bad luck. He settled in a hardwood forest and reported good crops of wheat, corn, oats, potatoes, clover and “all kinds of garden truck”.

Frederic is unique in its location on Michigan’s “spine”, that is the north – south ridge that runs the length of the lower-peninsula.  Two major waterways originate within yards of each other.  The AuSable River system runs through Frederic Township south to Grayling where it swings east to feed Lake Huron at Oscoda.

Also having its origin south of Otsego Lake, flowing southward past Frederic and then swinging west, the Manistee River feeds its cold fresh waters into Lake Michigan.  The “Land Between The Waters” was considered neutral ground among the many Indian tribes that used the AuSable and Manistee Rivers to travel the breadth of the state.

Frederic owes much of its early growth to lumberman David Ward, who established, what was to become to be one of the largest sawmills in the industry, about five miles north and west of Frederic “as the crow flies”.  The spur railway that moved Wards sawn lumber connected with the main line at Frederic so Frederic was the logical center for the lumberjacks during their off times.  In the early years Frederic shipped pine bark, railway ties, shingles and local produce.  J. A. Barker was the postmaster.

By 1885 Frederic could boast of a wagon maker, mason, general store for provisions, church’s, a school and local law enforcement. The railroad also brought hunters and fisherman to harvest the forests bounty. Travel accommodations sprang up and restaurants were opened to feed visitors and residents alike. By the late 1800’s the pine logging was pretty much over. The hardwood cutting lasted until the 1920’s.

Northern Lower Michigan is replete with ghost towns that appeared with the loggers and disappeared as soon as the last white pine or hardwood log cleared the blade of the saw. They had served their purpose. A few of these settlements survived because they had other industries to fall back on.

Frederic was located both on the main rail line, (over the years it ran under many names), which was eventually extended to Cheboygan and Mackinaw City, and the main north-south highway, M-27.  Travelers going north for hunting, fishing or camping had to go through Frederic and they stopped there for gas and to do their shopping or to just rest up for a spell before continuing their journey.

In 1957 construction started on the Michigan section of I-75 that was built to connect the Canadian “Sault” with Key West at the southern tip of Florida. All the highways like M-27 became by-ways overnight. Folks discovered they could start in Detroit and drive to Mackinaw without stopping. Communities that failed to be blessed with interchanges died leaving shells where once business thrived.

Frederic survives. It had grown enough by the demise of the lumber industry to stand on its own two feet as a community. It had grocery stores and meat markets, churches of several denominations, restaurants, a bakery, boarding houses and saloons.

The cultural make-up of Frederic was diverse with extensive documentation of the various early families housed at the Crawford County Historical Museum.  Rube Babbitt, one of the State’s first Conservation Officers was frequently seen in Frederic.

The AuSable Woodworking Company is one example as to the reason Frederic still survives.  Founded in 1923 by William Johnson, the company started “making wooden souvenirs such as candle holders, napkin rings, ash trays and mugs”. Having survived several major fires and other setbacks the company has gone on to become one of the world’s largest souvenir plaque manufacturers.

Today Frederic remains as a small community located on one of Michigan’s by-ways but also has become a key destination for outdoor enthusiasts.

During the winter, snowmobiler’s flock to Frederic as their headquarters for trail riding in all directions.  Summer is the time to hit the streams for some of the best fly fishing opportunities to be found in the country or to head for Hartwick Pines State Park where a visitor may step back in time and see what the lumberman first saw when he came to Michigan to harvest her rich’s.

Probably the most important reason Frederic has survived are the family’s that have contributed so much to the community for the decades. Each of these families has an interesting story to tell.  Fortunately, many of these documents and archives are preserved at the Crawford County Historical Museum in Grayling and are available to the public during normal business hours.

To submit information for publication, or for questions regarding promotion of your business, please email mconstance@UpNorthVoice.com, or call 989-275-1170.

Up North Voice is a division of AuSable Media Group, LLC, based at 709 Lake Street in Roscommon