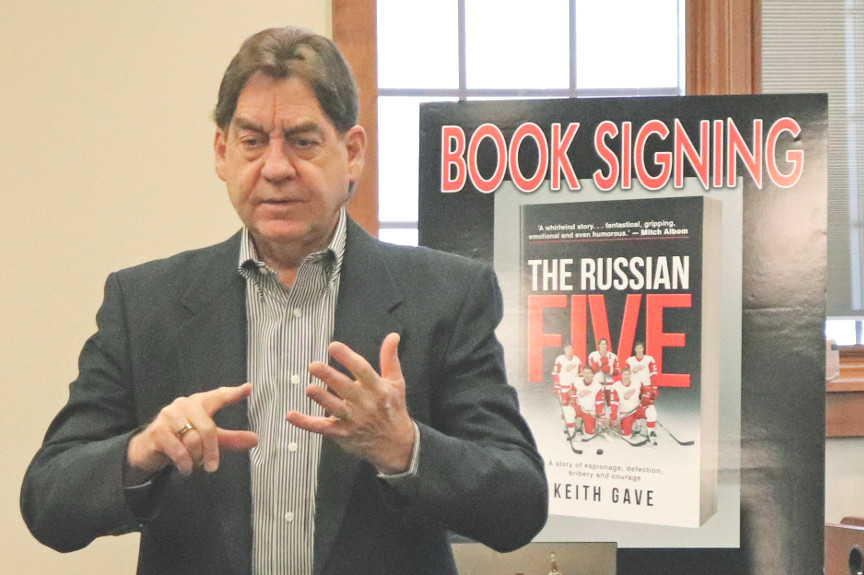 ROSCOMMON – From a clandestine meeting in Helsinki, Finland to the escape of Czech hockey star Peter Klima from a West Berlin hotel room.

Roscommon resident and former Detroit Free Press Writer Keith Gave offers readers a spellbinding account of the initial efforts of the National Hockey League to bring some of the best hockey players in the world to the United States, against the backdrop of the Cold War between the U.S. and the former Soviet Union.

The escape of the players to 1990s Detroit did more to bridge Russian and American relations than decades of diplomacy and d+¬tente between the White House and the Kremlin.

Straddling the line between reporter and international spy, Gave brings the history of the Red Wings four-title run to life.

In ‘The Russian Five, A story of espionage, defection, bribery and courage,’ Gave reveals for the first time that he was the initial contact in a years-long series of secret meetings from posh hotel rooms to remote European forests to orchestrate the unlawful departures from behind the Iron Curtain; including former Czech player Peter Klima, as well as Soviet Union superstars Sergei Fedorov, Viacheslav Fetisov, Vladimir Konstantinov, Vyacheslav Kozlov and Igor Larionov, to the Wings.

‘Until now, few knew of the role played by one multi-lingual erstwhile Detroit Free Press reporter who stick-handled through the Soviet KGB to plant the seed that sprung two of the most important spokes in the winged wheel,’ said Mike ‘Doc’ Emrick, the five-time Emmy Award-winning, Hall of Fame broadcaster and the voice of hockey on NBC-TV. ‘This book. . . is the ultimate ‘inside story.”

The role wasn’t one Gave accepted lightly, which ultimately prompted him to help the Wings make the initial contact at his own expense, with a verbal guarantee from the Illich family that the Free Press would get the story first.

But the book is as much about how Gave came to that point in his life as well.

‘What stands out is how, without any sort of plan whatsoever, all the various paths I took in my life — often on a whim – culminated in this book,’ Gave said.

‘The flimsy plan I had for my life when I entered college was to get a degree in something, anything, and, if I was lucky, to teach and coach baseball one day. That was it.’

However, a shortage of tuition money prompted Gave to take a semester off. That resulted in his draft number being drawn. So he enlisted on the Army’ guarantee that he attend Russian language school for a year, then get assigned in another part of the world, which happened to be West Berlin.

‘I sort of backed into a newspaper career, wound up on the sports desk after many years as a news reporter, started covering hockey and then the Russians started coming over,” Gave added. ‘Clearly somebody had a plan for me, but it wasn’t me.”

Gave said that neither of his parents were aware of the role he played in initiating the contact that brought the players to the Motor City.

‘I lost my father on the very day that Dave Robinson, the sports editor at the Freep, offered me the Red Wings beat. So he never knew.

‘My mom liked it better when I worked on the city desk so she could brag to people about my Page One stories. But the Wings and all their antics got me there often as well.’

Gave will appear at Saturn Booksellers, Gaylord, for a launch party and signing on March 20, 7 p.m.

The book can be preordered on Amazon.com, Indiebound.org, Barnes & Noble, Walmart, Target and eBay.

A feature-length documentary film, ‘The Russian Five’, is scheduled to premiere in Detroit on April 11.

– Mark Constance contributed to this story.