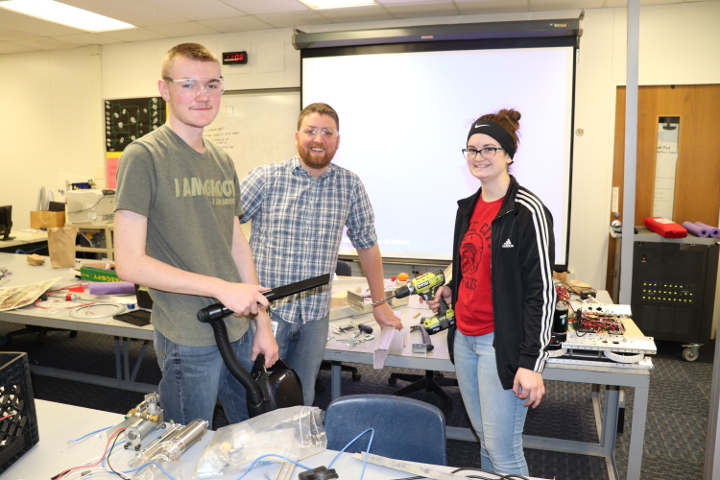 ROSCOMMON COUNTY – FIRST Robotics has started a new year, and there are changes to the Roscommon team. Besides their name change, now the RoboReactors, they have two new mentors, Ryan Sherman and Holly Maddox.

‘We are a pretty young team,’ Sherman said. ‘Only a couple veterans returned. We are doing what we can with the limited number of students we have.’

Even with the new team, their robot building was progressing.

‘The robot moves on its own and has cameras. We still need to work on our arm that moves milk boxes,’ Sherman said.

As explained on the FIRST Robotics website, under strict rules, limited resources, and the guidance of volunteer mentors GÇª teams have six weeks to build and program robots to perform challenging tasks against a field of competitors.

This year’ theme is FIRST Power Up with teams trapped in an 8-bit video game. The three-team alliance has to help defeat the boss. They earn points by tipping the scale or switch in their favor, exchanging power cubes for power ups, and climbing the scale tower to face the boss.

The Houghton Lake team, RoboCats, has designed a robot with expandable and extendable arms to move the boxes.

Team Captain Hunter Tyrrell is excited about this year’ events.

‘Last year was our rookie year,’ Tyrrell said. ‘We are running on grant money and we have tons of sponsors, including Home Depot. We’re increasing the complexity of the robot and using an air compressor with pneumatics for the experience.’

Unlike athletic competitions where teams are out to win for themselves, FIRST Robotics is a different concept – one of working together.

‘There’ some robot specs, some hardware, and some coordination of teams,’ Houghton Lake mentor Dennis Saglimbene said. ‘There’ a whole network of the robot/team spirit.’

Teams must raise funds, design their team ‘brand’, and perform community outreach. They are also rewarded for helping other teams.

‘It’ more of a co-opertition,’ Sherman said. ‘Teams cooperate a lot. Teams will help in needed during a competition, they will give you parts or help code.’

Some teams even share their robot plans over the internet.

‘We got plans from a team in Houston, Texas. We just have to scale them to our robot.’