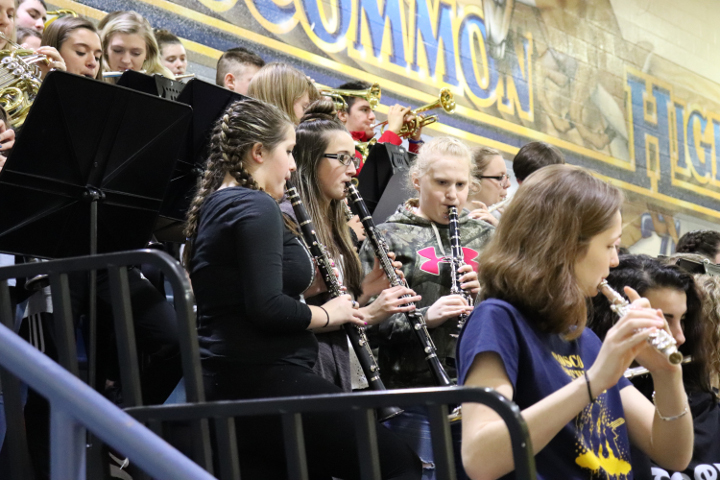 ROSCOMMON — After a good showing through the first three quarters of its game against Jack Pine Conference leading Sanford Meridian at home on Friday, Jan. 19 the Roscommon boys’ basketball team saw the bottom fall out in a 67-33 loss.

Down by 12 after the third period, Roscommon went flat and didn’t execute as a team at either end of the floor, and the Sanford Meridian, as all good teams will, capitalized on the Bucks’ troubles and stretched out their lead.

“We simply struggled,” Roscommon coach MJ Ewald said. “I’m really happy with how we executed through three quarters, though. The kids played with great intensity and energy. We’ll get back at it, and continue to find ways to improve.”

Dane Smitz led the Bucks with 14 points, while Gage Sarna and Seth Keipert each added five points. Carson Crabtree and Kyle Hartman both showed good hustle, especially on defense and on the boards.

“Smitz had some great drives down the lane, and did a good job overall defensively,” Ewald added. “Keipert had some strong moves in the low post, and was also solid defensively.”

The loss snapped a two-game winning streak for the Bucks who defeated Farwell, 66-43 on Jan. 9 which ended a six-game losing streak to start the season. Roscommon then turned back county rival Houghton Lake, 63-34 on Thursday, Jan. 11.

The Bucks went on a 20-2 run to end the first half and take a 24-17 lead, and outscored Houghton Lake, 39-17 in the second half overall to pick up their second straight win and move to 2-4 in the Jack Pine Conference on Jan. 11.

“Because of Houghton Lake’s experience, I was concerned with their quickness and strength in the post,” Ewald said. “In a tough environment, I’m really happy with how the kids responded, especially with the foul trouble we got ourselves into,

“I thought we did a nice job of trying to mix up our drives to the hoop with our perimeter shots. In earlier games this season, we didn’t do that consistently. The past three games, we have.”

After a slow start, the Bucks finally started to score in transition and erased a 17-10 deficit early in the second quarter in route to a dominating 67-43 win over Farwell in the Jack Pine Conference on Tuesday, Jan. 9.

Gage Sarna led the Bucks with a career-high 21 points, Dane Smitz followed him in scoring with 13 points while Trey Heliin and Seith Keipert each hit for a career-high 10 points.

the leading playmaker with seven assists and he also had three steals, while Sarna had two assists.