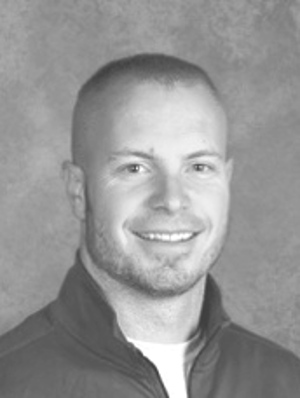 GRAYLING – A new man is in charge for the Grayling football team with the appointment of former assistant Eric Tunney to replace Tim Sanchez, who recently stepped down from the position after nine years at the helm and accepted a position as middle school principal.

Sanchez leaves behind a winning legacy, with the Vikings accumulating a 64-29 record in his nine seasons as coach, the most wins compiled by any varsity coach in the program’s history. The Vikings qualified for the playoffs eight times.

Grayling won back-to-back Jack Pine Conference titles, had one undefeated season and three nine-win seasons during Sanchez’s tenure. The Vikings picked up their first playoff win against Standish Sterling, 31-0 in 2010 and beat Kingsford at Roscommon three years later, and again in 2016.

Tunney won a state title as a player at Whittemore-Prescott, and was all-state in his junior and senior year before getting a scholarship to play football at Central Michigan in Mt. Pleasant. He was named the team captain his senior year at CMU and had a tryout with the NFL’s Carolina Panthers.

After he was cut by the Panthers, Tunney moved on to Grayling and has been on the Vikings’ coaching staff under Sanchez for the last nine years. He knows he’s filling some big shoes. Tunney and his wife, Britt, were high school sweet hearts and have two children, a son Kallen, 5, and 3-year old daughter Mariella.

“It didn’t take long for me to answer yes (when asked). It’s obviously a huge honor,” Tunney said. “I’m humbled to be in the position. It’s been great to work with Tim for the last nine years. I’ve learned a lot from him. I’ve learned a lot from my high school coach, and my college coaches. We’ve had a lot of good things that have happened. The team has had a lot of success, and I hope to keep that moving.

“We have a lot of kids that have a lot of experience coming back, which obviously is a huge benefit. We’re losing a lot of great seniors, which are always tough to replace. Our quarterback, Justin Nicholas, was all-state. He was a gamer.”

Sanchez didn’t make any changes to the coaching staff, except for bringing in former all-state quarterback Jimmy Osga to help with the offense because of knowledge on that side of the ball.

The staff has been going over the playbook to determine what system will fit this group of players best moving forward. Every coach has different philosophies. Changes are expected.

“Justin had a golden arm last year, so we utilized that and threw the ball way more than we ran,” said Tunney. “It’ll still be a similar offense, and we’ll still throw it. We may run a little more because we don’t have Justin.

“We’re looking at Logan Joseph to possibly be quarterback next year, and he can do both, run and throw. There’s a lot of days before that, and we’ll see. We’re still in the process of adding and taking things out of the playbook.”