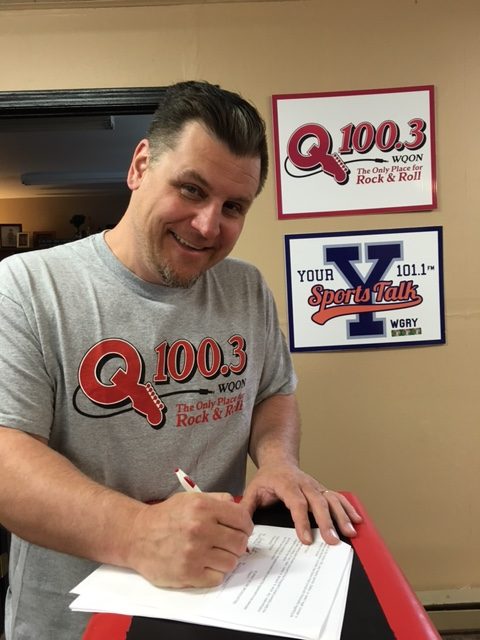 By Maureen Barkume GRAYLING – When Chad Patterson steps into the broadcast booth this season as the new voice of Grayling Vikings football and basketball, he’ll be fulfilling a lifelong dream – and battling no small amount of apprehension.

‘I’m sure I’ll be sweating bullets,’ he said. ‘It’ a dream-come-true for me as someone who has followed sports my entire life. And coming from a theater background, a storytelling background, any time you can paint the picture of what you’re watching – that’ basically what directing is, what playwriting is.

‘I feel like I’ve narrated a lot of games in my head already. . . I’m not going to say it’ll be an easy transition – and I’m not taking lightly the shoes that I’m filling.’

Patterson, who recently agreed to a deal with Blarney Stone Broadcasting to call Vikings games, succeeds the award-winning team of Tom McCord and Rich Calkins, both of whom have retired.

‘I know I’m a novice compared to them,’ Patterson said. ‘The fact that I’m even getting an opportunity to do this considering I’ve never done it, it’ a miracle. Following in Tom and Richard’ shoes, there’ a little bit of trepidation. I listened to those guys. They were top-notch.’

A para-pro who works with autistic students at Grayling High School, Patterson was a theater major in college and owns Acting Up Company, a children’ theater group that holds performances at schools through the state. He has been a producer of the Q100 Christmas plays as well.

But he’ no stranger to football. He was a lineman on both sides of the ball at Leslie High School in the 1980s. He knows the game and he hopes to bring more to his play-by-play than basic down-and-distance and mentioning the score often enough, which is what most listeners are interested in.

‘I also know there are educated listeners who want to know if a team is in a spread offense, where the tight end is playing – weak side or strong side,’ Patterson said. ‘I hope to get into the geeky, nerdiness of the sport that some others get into as well.’

To do that well, Patterson – who has emceed the AuSable River Canoe Marathon for years – plans to do plenty of homework.

Along with reading books on broadcasting and listening to some of his favorite play-by-play sportscasters like Grayling’ George Blaha, who calls Detroit Pistons and Michigan State football games, and others, Patterson hopes to spend some time with McCord and Calkins and the Vikings’ football staff as well.

‘I also want to call all the other conference coaches, go through their rosters with them, make sure I’m pronouncing all the names right,’ he said, ‘and learn a little about what kind of offensive and defensive schemes those coaches are running.’

Sheryl Coyne, president of Blarney Stone Broadcasting, said she is beyond confident the station has found the right voice to succeed McCord and Calkins.

‘We’re thrilled and proud that Chad has agreed to call Grayling Vikings football and basketball games, and we know he’ll do a great job describing all the action for our Q100 listeners,’ Coyne said. ‘This is football country here in Northern Michigan, and we’re all looking forward to another great Vikings season.’