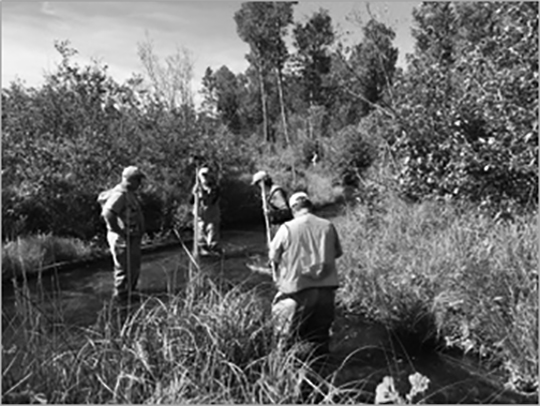 GRAYLING – Work begins in earnest this week on a Consumers Energy-funded project to enhance five miles of an Au Sable River tributary to improve trout habitat.

The Mason-Griffith Founders Chapter of Trout Unlimited received a two-year $165,085 grant from the Habitat Improvement Account that is funded by Consumers Energy and administered by Michigan’ Department of Natural Resources.

The local Trout Unlimited chapter is using the funds to improve the fish habitat on five miles of the West Branch of Big Creek, a brook trout stream and Au Sable River tributary. Mainly college students will spend about 13 weeks during the summer doing the work, which will include adding in-stream structures such as log jams along the banks and clearing or moving in-stream obstructions.

‘It’ gratifying to see how responsibly the funds are applied and to experience how they are used for improving the environment and increasing recreational opportunities for Michigan residents and visitors to our Great Lakes State,’ said William Schoenlein, Consumers Energy’ manager of hydro and renewable generation.

‘The funds from Consumers Energy have helped organizations like ours do a lot to improve Michigan’ rivers,’ said Karen Harrison, president of the Mason-Griffith Founders Chapter of Trout Unlimited. ‘We’re confident this project on the West Branch of Big Creek will significantly increase the ability for trout to thrive in the improved stretch of water.’
‘We’re getting busy with the ‘waders-in-the-water’ effort today after the work crews spent last week in safety training and getting familiar with their equipment and the stream,’ Harrison said.
Since being implemented into the hydro project licenses in 1994, Consumers Energy has contributed more than $8.5 million to the account.

$47,520 over two years for the Buhl Dam removal project on the Pine River, a tributary of the lower Au Sable River, as the dam no longer functions and limits fish passage.

Sept. 17 was a big day for the state’s fisheries, and another crucial step toward reintroducing Arctic grayling to Michigan waters. The first year-class...
Read more
- Advertisment -