Beyond Rare: Restoring a River for Michigan’s Endangered Beetle 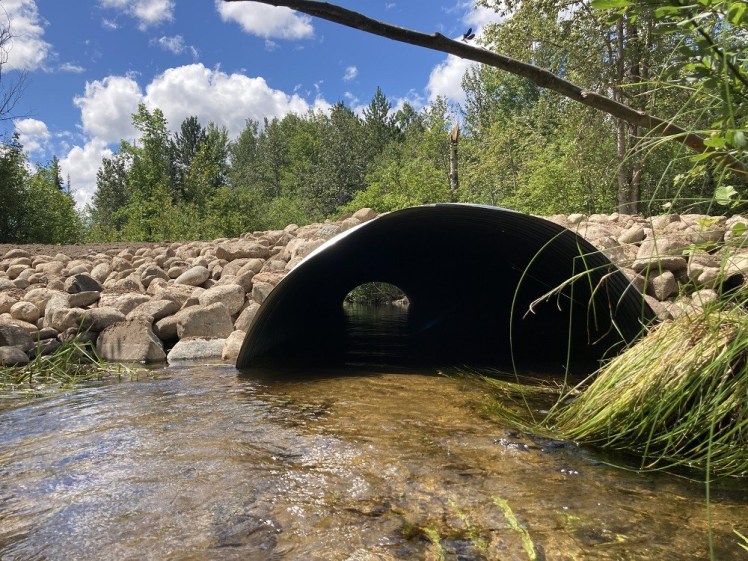 REGION – Michigan’s most endangered species is also one of the state’s smallest animals, with a knack for playing hide-and-seek.

In a tucked-away corner of Oscoda County, on a branch of a branch of the Au Sable River, the Hungerford’s crawling water beetle scrambles along the creek bottom on tiny, spiny legs. It’s smaller than a watermelon seed and its numbers are so few that Michigan’s entire beetle population—which is virtually every known Hungerford’s crawling water beetle on Earth—could fit in the cupped palms of your hands.

The federally-listed beetle, found only on a few isolated streams in Northern Michigan and one in Ontario, requires special precautions anywhere nearby construction or river restoration work could affect its habitat. Such was the case in August when Huron Pines carried out a culvert replacement project where Pickerel Lake Road meets Middle Branch Big Creek in northern Oscoda County. While this clean, fast water holds some trout, Middle Branch Big Creek is a bit warmer than typical headwaters, making it prime habitat for the Hungerford’s crawling water beetle. As a precaution, the creek had to be surveyed for beetles before any project work could begin.

“They’re not very well understood but we know their habitat is tied to clean waters that are more alkaline (higher pH) and warmer than your average ground-fed trout stream,” Leisen said. “They tend to be in areas near beaver dams or pools near culverts and that’s why we do a survey ahead of time and relocate those we find.”

According to the U.S. Fish and Wildlife Service (USFWS), juvenile and adult Hungerford’s crawling water beetles are herbivores and require different habitats throughout their life stages—larvae hide in dense vegetation along stream edges while adults spend their time in midstream currents eating algae growing on rocks. Though they have wings, adults are hesitant to fly, moving through their habitat underwater instead. They were added to the List of Endangered and Threatened Wildlife and Plants on April 6, 1994 and the USFWS published a recovery plan for the beetle in September 2006, part of which requires a permit to survey for and relocate the beetle. Leisen is one of only a handful of permit holders in Michigan.

Leisen and Watershed Planner Samantha Nellis succeeded in their search for the elusive insect and captured a single Hungerford’s beetle in their nets. They released the lone beetle safely 1,500 feet downstream of the crossing, taking care to let it go near the bottom of the stream so it could quickly escape and hide from predators.

“It was neat, just knowing it’s extremely rare and we’re among a small handful of people who have ever seen or collected one,” Leisen said. “I believe there’s intrinsic value in protecting natural diversity. If we have a chance to protect a species, it’s a small lift to carry out a little survey and relocation to do so.”

After the beetle was moved downstream, the creek restoration was able to commence and involved swapping a four-foot diameter culvert for one with more than twice the capacity, allowing the Middle Branch Big Creek to flow unhindered under Pickerel Lake Road. This will slow the flow of water to keep riverbank erosion from blanketing downstream gravel habitat with harmful sediment.

The new culvert is D-shaped with the flat side resting on the river bottom, to allow stones and algae to collect in the culvert. It’s one more way of sustaining as much natural habitat as possible for the beetle and other river life, including trout.

The Middle Branch Big Creek restoration was funded by the National Fish and Wildlife Foundation’s Sustain Our Great Lakes program and the Michigan Department of Natural Resources Habitat Improvement Account, with in-kind labor and equipment from the Oscoda County Road Commission. Additionally, the U.S. Fish and Wildlife Service organized the training and issued the Recovery Permit required to survey and relocate the beetle.