Rabbits, Beagles, and Stew, Who Knew? 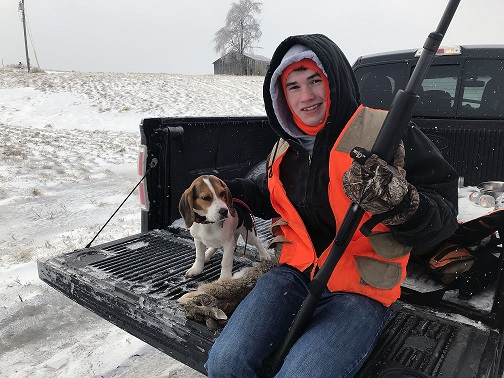 Michigan – As the snow starts to fly and the days get shorter, that means one thing for many folks –Rabbit Time! Rabbit hunting provides an excellent opportunity to get outside this winter, get some exercise, and hopefully bag a rabbit or two if you’re lucky.

My Grandpa Moon used to tell me tales of rabbit hunting with his beagle and his Belgian-made Browning A5 shotgun. Unfortunately, by the time I came along, my grandpa had gotten out of hunting, but the stories sure lived on.

Spending a big portion of his life in Alabama, he was a storyteller without even trying hard at it. I can remember being in awe listening to him tell stories of bringing rabbits home for my mom and grandma to clean, which as a kid was something I just couldn’t comprehend.

“Rynee,” as he liked to call me in that deep Southern accent, “those rabbits made some fine vittles.”

It wasn’t until my late 20s that a group of guys I met from the Grand Rapids area introduced me to rabbit hunting the old-fashioned way, without the use of dogs.

You can have a lot of success with some good old-fashioned stomping through the brush. The cottontail rabbit really prefers brushy and overgrown areas like old fence rows, brush piles, stands of conifers, orchards, stands of grass and overgrown fields.

I can recall my first rabbit hunt, fresh snow on the ground, the crisp cold air and bright blue skies. Naturally, I wasn’t prepared for just how much walking we would do, and I wore way too many clothes, based on what the temperature was, just standing still.

There were several of us who embarked into an old overgrown apple orchard surrounded by old fields. We all made sure we had plenty of orange on and began our march, side by side through the woods.

Bobbing, weaving, stomping and kicking brush, along with a little huffing and puffing at times to catch our breath, not only from the exercise but from the endless number of laughs.

When you are on a good rabbit hunt, the amount of rabbits you encounter seems to be in direct correlation with the amount of laughs you have throughout the day.

This is generally caused by rabbits squirming and running in between people, coming out of a brush pile the opposite way you thought they would, shots at snow where a rabbit stood moments before, and there is always someone toppling over at some point, shins tangled in vines, sticks, or that log you didn’t see under the snow.

Hopefully at the end of the hunt, you are not only rewarded with some great memories, but also some delicious rabbits for the dinner table.

After several years of going with my friends to spots across West Michigan to hunt rabbits without a dog, I was fortunate enough to get invited by now retired Michigan Department of Natural Resources’ Wildlife Division Assistant Chief Doug Reeves to hunt with him on his farm near Brant, along with his trusty beagle Roscoe.

I was warned that Roscoe was old, hard of hearing, had poor eyesight and was nearing retirement, but he still loved to run rabbits. We met up one January day at Doug’s place. Roscoe was sitting in his kennel eyeing us get dressed and ready for the hunt.

As Doug, and another coworker, Ann LeClaire, and I headed down the path toward the fields behind the house, my excitement was building. It wasn’t long after we circled around the first brush piles that Roscoe let out a bellow.

“There it goes,” yelled Doug in excitement, as a rabbit shot like a rocket off into the thick brush. Roscoe came up slowly but surely, hot on the rabbit’s trail, letting out another bark every few feet to signify to Doug that he still had the rabbit’s scent and was trailing it.

When a beagle jumps a rabbit, the rabbit will lead him all over, trying to evade the dog, eventually running back in a circle to where it started. If you are properly positioned and are on the ready, then maybe you will have a shot at the rabbit while it bobs, weaves and darts through the briars.

We had numerous opportunities to shoot at rabbits but hitting them was a different story.

My best memories of going hunting with Doug weren’t just the rabbits that we were able to bag, but all the other aspects of the hunt. Walking through a freshly snow-covered field and seeing tracks of animals you maybe never knew existed out there before; seeing birds, such as cardinals, whose colors appear to be almost fake they are so vibrant and beautiful; or hearing old stories of hunts and gatherings that have happened on the farm.

“Here is that spot I kicked a pheasant up last year.”

“Here is where my wife, Diane, shot a turkey a couple years ago.”

“Here is where I saw a coyote last winter hiding in the brush pile as we were running rabbits.”

One of the best parts of those hunts was having lunch prepared by Doug and his wife back at the house after a couple hours of walking. To date, one of the favorite recipes I’ve ever had prepared for any wild game was the “sherry baked rabbit” Doug prepared on my first trip to the farm.

In writing this article, I sent a note to three other DNR employees who are avid rabbit hunters. Two of them hunt exclusively with beagles, and one is where I was about 15 years ago, having never hunted behind dogs.

I asked them what their favorite part of rabbit hunting is. The answer was unanimous – it’s the comradery: being able to talk, yell, laugh, scream and poke fun at each other while spending the day together.

There is an old Waylon Jennings song that has a line that says, “If you want to get the rabbit out the L-O-G, you have to make a commotion like a D-O-G.”

I can’t tell you how many times I have thought of that line when out rabbit hunting. I’ve witnessed friends of mine do everything from standing atop an 8-foot brush pile and bouncing up and down on it to crawling on their hands and knees going after a rabbit under some thick brush.

One of the best parts of rabbit hunting is that there really isn’t much fancy equipment required. You must wear some blaze orange, but aside from that, it really is up to you.

A lot of people prefer to wear a vest, but old Carhartt’s are fine, jeans on some days, an old flannel or a combination of all the above. Some heavy canvas-type pants are a good investment, mainly to avoid snags and pickers.

My favorite gun to use rabbit hunting is a shotgun with a very open choke tube, so that the shot spreads out fast and wide, typically either 6s or 7.5s. There are some out there who hunt with a .22 rimfire rifle, slowly stalking and creeping along to get a shot at a rabbit either sitting still or running.

Depending on your method, rabbit hunting is something that can be done by young, old or anyone in between. Hunters who have trouble getting around, in many cases, can be posted up to stand guard, maybe at the end of a field or swale.

If you have kids, or maybe a friend or neighbor does, it is the perfect opportunity to have them tag along. It is great to be able to have them share in the splendor of the hunt, educate them along the way about things such as old buck rubs and animal tracks, or just get them unplugged from social media for a while.

Whatever the case, don’t wait to plan that rabbit hunt.

Before you know it, winter will be over, and you will be kicking yourself wishing that you got outdoors a little more this winter. Find a friend, explore a state game area, or maybe knock on a few farmers’ doors to ask permission to hunt rabbits.

Rabbits or no rabbits, you won’t regret your time outside stomping around this winter, and if you are lucky, you can bring a rabbit or two home to make into a delicious meal.

To submit information for publication, or for questions regarding promotion of your business, please email .

Up North Voice is a division of AuSable Media Group, LLC, based at 709 Lake Street in Roscommon