‘Granny’ rides a Triumph; Memories of the Jack Pine Enduro 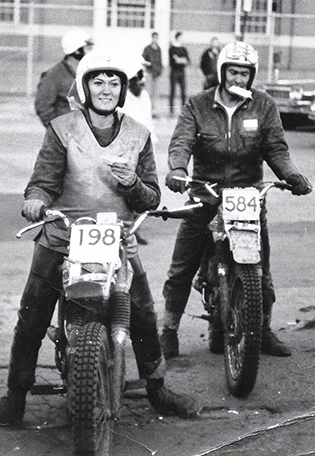 GRAYLING – The world is full of interesting people.  Some folks are into horses, some find pleasure in stamp collecting and some live to hunt and fish.  We do these things for the pleasure they provide us.

Connie was born and raised in Morenci, in south west Michigan near Jackson.  Her Dad and brothers were all bike racers and, being an admitted tomboy, Connie went right along with the family.  They were frequent customers at “Earl’s Cycle Center” in Jackson.

Connie’s first bike was a “Triumph Tiger Cub” that she used to participate in all the weekend races, scrambles and cross-country events right along with the rest of the family.

After Connie graduated from high school, she enrolled in the Medical Technology program at Michigan State University.  It was then when she met her future husband Steve at an endurance race at Mio. Steve just happened to also have a great interest in motorcycles and racing.

The pair had two sons, Chad and Eric; and the entire family was moved on two wheels.  Connie’s favorite races were the Endurance Runs where you were timed on the various segments.  If you ran too fast or too slow you were penalized. The objective was to complete the course as closely to the prescribed average time as possible.

As the family was grew, weekends were spent at hill climbs, scrambles and any other races they could find.  Much of the time the family spent camping together at the race tracks.

One of the major runs was and still is, the “Jack Pine Enduro”.

The Jack Pine Endurance run was started by the Lansing Motorcycle Club in the early 1910’s.  The course was a two-day event running five hundred miles throughout lower Michigan.  The terrain was rugged, testing both bikes and bikers.  The goal was to average 24 miles per hour between each check point.

Connie well remembers the day that she, her Father and her brother all completed the race with almost identical times.

In 1972 Connie, Steve and the family moved to Grayling.  It was more convenient to Steve’s work location.  They had been to Grayling many times on cross country and endurance bike events and had decided the community best suited their life style.  Connie found work in the lab at Mercy Hospital and a few years later was hired as a biologist in the Serology Lab at the Michigan State Police Crime Lab in Grayling.

When the family moved North, they discovered another passion, the AuSable River Canoe Marathon.  Their sons have competed many times in the various events over the years and the five grandchildren are getting the paddle bug.

In 1991 Connie entered the Marathon with Brenda Carlson.  They finished the race with a time of 17 hours and 35 minutes.  In 1997 they repeated the race and finished with about the same time.

Since 1986, Connie has raced a total of five times in the AuSable Canoe Marathon and if she, or other family members, are not racing, they are feeding other teams as support crews along the route.

When asked how she has continued to compete for so long in so many different things, Connie said she’s always in training.