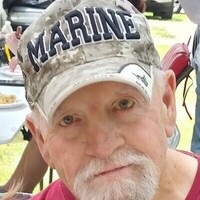 Michael was born in Charleston, West Virginia on July 30, 1952 to James and Lillian (Brooks) Hodge. The family moved to Michigan when he was a toddler. Michael served his country in the US Marine Corps during Vietnam. He lived in Pontiac and settled in Luzerne in the early 1980’s. Michael married Marge on October 16, 1998 in Mio. He worked for Proto Tube and also did small engine repair. Michael enjoyed fishing and camping. He will always be remembered as a “People Person”.

Visitation on Wednesday, July 13, 2022 from 3 – 8 PM at the Lashley Funeral Home, Mio, MI, and also on Thursday, July 14, 2022 from 10 AM until Funeral Services at 11 AM with Pastor Ray LaBush officiating. Interment and Military Honors will follow the services at Luzerne Cemetery, Luzerne, MI.