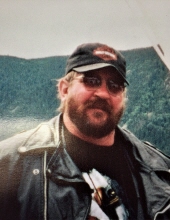 Kenneth Lee Arquette, age 66, loving, husband, father, grandfather and son passed away unexpectedly Monday, July 11, 2022. He was born on July 1, 1956, in Bay City, Michigan to Leo & Edna (Kitzman) Arquette. He married the love of his life Patricia Ransier on December 28, 1988 in Standish, Michigan. He retired from General Motors after years of service. He was a member of the Bethlehem Lutheran Church, the UAW Local 699, sons of the American Legion, the Eagles Club, and a lifetime member of Harley’s Owner Group. He was known for his love of woodworking, camping, hunting, riding his Harley and tinkering in the garage, most of all he enjoyed spending time with his family.

He is survived by his wife of 33 years Patricia, his mother Edna Arquette, his children Lindsey (Joe) Smith, and Kenneth (Leasha) Arquette, a grandson Caleb Smith, mother-in-law Lois Guerin, several aunts, uncles, nieces and nephews. He was predeceased in death by his father Leo, a brother Rodney Arquette, and father-in-law Russell Ransier.

Funeral Services will be held Friday, July 15, 2022, at 1:00 pm from the Lee-Ramsay Funeral Home-Standish Chapel with Pastor Matthew Dent presiding with burial in Sterling Cemetery. Friends may visit at the funeral home on Friday, from 10:00 am until time of service.

To send flowers to the family or plant a tree in memory of Kenneth (Trucker), please visit our floral store.
Leave a Comment