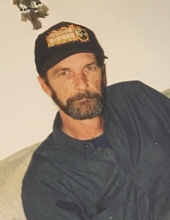 Jack was born on March 15, 1957, in Dearborn, MI to Herbert Hoover Lucas and Carole Elizabeth Allen. The family moved to West Branch, MI in Jack’s early childhood and he spent most of his life here.

Jack was a welder and fabricator and could most often be found in his garage wrenching and tinkering. He loved his motorcycle, mud bugging, four wheeling, race cars and anything with a motor. He loved to be outdoors, hunting and fishing. He never missed an opportunity to spend time with his family and friends or to share a drink of cactus juice. He was always willing to help anyone he knew and was everyone’s favorite uncle.

He is preceded in death by his father, Herbert Hoover Lucas and both paternal and maternal grandparents.

According to his wishes, cremation has taken place and a celebration of life will be held.

To plant a beautiful memorial tree in memory of John “Jack”, please visit our Tree Store or plant a tree.