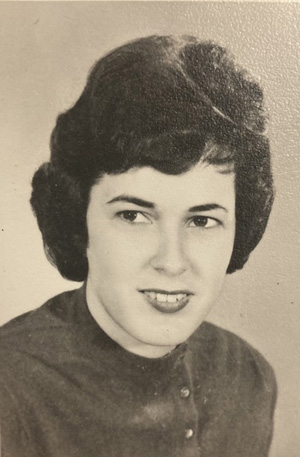 She graduated from Bowling Green State University with a B.S. degree in education. She later earned her master’s degree from Central Michigan University. She met her future husband, Wayne Warner in Xenia, Ohio, when he was in the army. They were married on July 1, 1967 and spent 55 years together. They had one son, Jeffrey, who passed away in April, 2021 from COVID.

Gloria taught school in Monroe for two years before moving to Gladwin. Gloria taught 5th grade and was later the Elementary Librarian until she retired in 1994. Gloria was a very kind and caring person.

She loved bow hunting for deer, finding it very relaxing after a day of teaching. She also enjoyed reading, craft projects, watching birds, playing mahjong, and cards with friends.

She was also a sports fan, watching football and basketball. Gloria and Wayne enjoyed traveling here in the states and overseas to Europe, Australia, and New Zealand. In later years they spent the winters in McAllen, Texas area where they made many friends.

She will be dearly missed by her husband: Wayne of Gladwin; daughter-in-law: Connie Warner of Virginia; special cousin: Emily Aspell of South Carolina; sister-in-law: Delores (Jerry) Gardner of Dewitt, Ilene (David) Thornwell of Texas; brother-in-law: Joe (Linda) Warner of Beaverton; along with several nieces and nephews and their families.

She was proceeded by her son: Jeff; her parents: Fay and Anne Paul; sister: Shirley Judy; in laws: Donna and Ernie Warner; and John Aspell.

Cremation has taken place and graveside services will be held on Friday, July 22, 2022, 2:00 P.M. at Grout Township Cemetery.