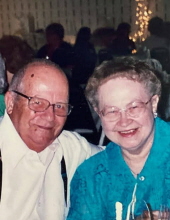 Shirley Mae Archer, a resident of National City since 1963, passed away peacefully at her home with her family and hospice care at her side at the age of 91. Shirley was born to the late Clarence H. and Mildred A. (Michling) Reliford in Roseville, Michigan on August 10, 1930.  She graduated with the class of 1949 from Roseville High School and married her high school sweetheart, Gordon Archer, on September 3, 1949 in Detroit, Michigan. The couple eventually moved north and made their home in National City and began raising their 2 daughters, Judy and Deborah.

Shirley was employed at the Iosco County Medical Care Facility in Tawas for 23 years, working to provide loving care primarily as a Nursing Assistant. In 1990, Shirley was afforded the opportunity to step away from her long and successful nursing career and begin to enjoy her well-deserved retirement! She found so much joy in keeping busy by painting ceramics, doing puzzles, collecting snow babies and crystal.

Shirley absolutely adored and cherished her grandchildren and great grandchildren, especially keeping up with all of their activities, achievements and successes in life. She has certainly left behind a special legacy to her family and friends that will forever be remembered and cherished!

Funeral services for Shirley were held at the Buresh Funeral Home in Tawas City on Friday, June 17, 2022 with Chaplain Karen Orban officiating. Shirley was be laid to rest in the Pioneer Cemetery in National City.

Those wishing to express their sympathies through a memorial contribution are encouraged to consider a donation in Shirley’s name to the Iosco County Veteran’s Services program at 420 West Lake Street, PO Box 778, Tawas City, MI.  48764. An online guest registry is available to leave a message of love and support for Shirley’s family at www.bureshfuneralhomes.com.

To send flowers to the family or plant a tree in memory of Shirley, please visit our floral store.