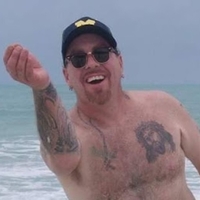 Leonard “Lenny” P. Wilson, age 50 of Mio, Michigan, passed away at My Michigan Hospital in Midland, Michigan on Sunday, June 5, 2022.

Leonard was born in Detroit, Michigan on July 17, 1971 to Oman and Adriana (Budnick) Wilson. He graduated from Summerfield Baptist High School in Riverview, Florida. Lenny worked as a Deck Captain for Operating Marine Division Local 25 out of Tampa, Florida. He lived in Pennington Gap, VA and Martinsville, IN before settling in Mio, MI in 2012. Lenny attended the AuSable Bible Church in Mio and enjoyed fishing, tinkering with his Mustang, and working on small engines.

Leonard is survived by his wife Sandy Wilson of Prudenville, MI; his father Oman Wilson of Mio, MI; his children: Kaleb Shinn of Mooresville, IN, Kaitlyn Wilson of Garden City, MI, and Coral White of Tampa, FL; his stepson Stephan Bryson of Ionia, MI; his sister Deanna MacIntyre (Joseph Kaczmark, Jr.) of Mio, MI, his brothers: James Wilson of Mio, MI and Michael Wilson (Tammy Laurel) of Gibsonton, FL, 10 grandsons and 1 granddaughter. He is also survived by his brother-in-law Robbie Smith and sister-in-law Julie Smith, his father-in-law Bobby Smith, his former wife Amber Moran, his special friends Red & Denise Barney, several nieces and nephews and great-nieces and nephews. Lenny was preceded in death by his mother Adriana Wilson, his granddaughter Kenzlee Shinn, his grandparents, his brother Joseph Paul Wilson, and his nephew James “Jimbo” Wilson.

In accordance with his wishes, cremation has taken place. A Memorial Service will be held at a later date at AuSable Bible Church, Mio, Michigan.