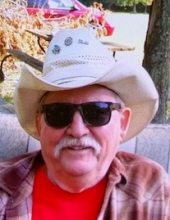 Larry Anthony Matuszewski, age 78, loving husband, father, grandfather and brother passed away following a courageous four-year battle with pulmonary fibrosis. He was born on December 5, 1943 in Standish, Michigan to the late Thaddeus & Sophia (Kielpinski) Matuszewski. Larry joined the Air Force at the age of 17; his basic training was at KI Sawyer Air Force Base in the U.P. of Michigan, he is a Veteran of the Peacetime and Vietnam Era, and while in Korea, he earned the Air Force Good Conduct Medal. He was a small arms expert, marksman, military police and a distinguished member of combat defense/law enforcement.

He married his loving wife, Deborah Ostrander on April 28, 1984 at St. John Vianney Catholic Church. She survives him. Larry was a life time member of St. Annes Catholic Church, American Legion Post 0239 of Linwood and a member of Fraternal Order of the Orioles #130 in Kinross, Michigan.

He worked for Prestolite in Bay City for over 10 years until their closing, then moved to Northern Tube, T.M.S. in Pinconning from 1990-2007. Larry was an avid outdoorsman and motorsport enthusiast, he visited God when he was in the woods, and he loved nothing more than to spend time at his cabin the U.P. that he and his friends built. Most of all, he loved spending time with his family and his wife.

Surviving besides his wife of 38 years are their children, his daughter Kristie (Mark) Stasinski and their son son Ted (Morgan) Matuszewski, grandchildren, Adam, Alec, Amanda and Sophia, a sister, Betty (Don) Doyle and many nieces and nephews. He was predeceased by his two brothers, who were his best friends, Thaddeus Jr. and Dale.

Funeral Mass will be held Wednesday, June 15, 2022 at 11 am from the Prince of Peace Parish-St. Anne Campus with Rev. Fr. Nicholas Coffaro presiding with burial in St. Mary’s Mt. Calvary Cemetery with full military funeral honors. Friends may visit at the Lee-Ramsay Funeral Home on Tuesday, from 2 till 8 pm. On Tuesday, a Prayer Vigil will be held at 7 pm. On Wednesday, Larry will lie in state at the church from 10 am until time of mass.

Those wishing an expression of sympathy in lieu of flowers are asked to consider the family’s wishes.

To send flowers to the family or plant a tree in memory of Larry, please visit our floral store.