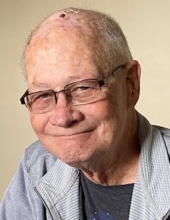 Howard Wilfred Keller, 77, passed away Thursday, June 2, 2022 at his home with his family by his side. Howard was born August 18, 1944 in Wyandotte, Michigan to the late Clement C. and Henrietta (Bruyere) Keller. He married Wendy Dagger January 17, 1976 in Romulus. Howard served his country by serving in the United States Army. He retired from Ford Motor Company where he was a track mobile operator. Howard loved woodworking, working on cars, vacationing, boating and taking rides on his property. Most of all he loved to sit on the porch and watch everyone enjoying the lake and bonfire. Howard also loved to collect antiques and character figurines. He was also a member of the Ford Yacht Club in Grosse Ile, Michigan.

Howard is survived by his wife, Wendy, of 46 years and his daughter Anida (Pat) Mackens. He is also survived by 3 grandchildren; Markcus Keller, Allie Mackens and Brandon Mackens and 2 siblings; Richard (Barbra) Keller and Yvette (Donald) Harrison. Howard was pre-deceased by a son, Michael Keller, and a brother, Richard Keller.

According to Howard’s wishes cremation had taken place. A Memorial Service celebrating Howard’s life is not planned at this time. Funeral arrangements have been entrusted to the Lee Ramsay Funeral Home-STANDISH CHAPEL, Standish, Michigan.