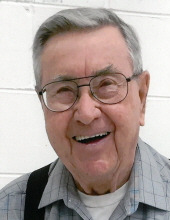 William “Dave” David Hufstedler, age 96, stepped into eternity on Tuesday, June 21, 2022 at The Villa at West Branch, surrounded by his loving daughters. He was born on February 20, 1926 in Corning, AR to James and Eathel (Cox) Hufstedler. His family moved to Michigan when he was 6 months old.

He was a Navy WWII Veteran and served as a Signalman 3rd Class serving in the Pacific COMDESPAC.

Dave was an entrepreneur at heart. He opened and ran several businesses, before settling into the insurance field as an agent for Farm Bureau. When first moving to West Branch he opened and ran the Hub restaurant. He sold the first pizza in Ogemaw County, at the Hub. His first menu from the restaurant is on display at the Ogemaw County Historical Society. While with Farm Bureau Insurance from 1976-1990, he was a member of the prestigious Million Dollar Round Table for several years. He was named “Person of the Year” by the West Branch Chamber of Commerce in 1983, which he referred to as one of his greatest accomplishments. He was a co-founder of Ogemaw Hills Snowmobile Club and was named Conservationist of the Year for his work on the streambank restoration projects on the Rifle River.

Dave was a people person and could strike up a conversation with anyone. He loved a good joke and party. He and his wife, Sandy, loved traveling. Some of their favorite trips were to England, Ireland, Austria, Scotland, and Holland. Dave and Sandy also enjoyed numerous cruises and traveled the United States in their fifth wheel once they retired. Their goal was to visit every state, before selecting a state of retirement. He and his wife settled in Sebring, FL and became part of the Buttonwood Bay family for twenty-two years. Once in Sebring, Dave again started working beyond the age of 80 as a handy man climbing up on roofs as part of his job.

Dave continued to travel into his nineties and has enjoyed numerous bus trips with North County Tours, after returning to Michigan. He was an avid sports fan and loved watching his favorite teams on TV. Dave was honored as a Hometown Hero at the Lions game in 2017 and celebrated his 91st birthday at a Tigers game with three of his grandchildren. He just recently threw out the first pitch to kick off the 2022 Little League Baseball season in West Branch.

He is preceded in death by his parents, wife, Sandra, sons, Craig, David, and Frank Hufstedler, daughter, Gail Carlisle, and his brother and sister-in-law, Frank and Barbara Hufstedler.