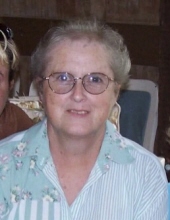 Barbara Baldwin was born in Monroe on July 14, 1944 to Owen and Ora (Brooks) England.
Barb, along with her sister Ruth (Frank) Hammac, her brother Cartis England and their parents lived in LaSalle for the majority of her life and she graduated from Monroe High School in 1962.

They were married February 28, 1974 and together they raised their 7 combined children-Tammy Hammac (of Monroe), Travis Hammac (of Monroe, currently residing in North Carolina), Barbara Sue Swanson (Baldwin)(deceased), Debbie Fultze (of LaSalle), Keith Baldwin (of Monroe) and Shannon (Barney) Weimer (of Carleton).

Upon Norman’s retirement in 1997, they moved to their little slice of paradise in Glennie, which was Norman’s childhood stomping grounds and that is where Eddy Koreis earned a place in their heart as an honorary “son”.

Barb loved the simple things in life such as tending to her flower gardens, watching the birds, butterflies, hummingbirds and deer. It is not uncommon to have dozens of hummingbirds all waiting their turn at the feeders, while the trees and feeders around their home would be filled with countless varieties of birds year round.

She also loved to crochet and played piano on occasion when the church was in need and was much more talented than she would ever let herself believe.

She loved to share her favorite desserts with everyone, but watch out if there was watermelon or strawberries around because those were hers! I think her biggest regret in life would be that she didn’t travel more and that watermelon wasn’t as delicious in winter as it is in the summer.

She was preceded in death by both of her parents, her mother and father in law (Orville and Helen Baldwin), her step-daughter Barbara Sue Swanson, and a grandchild- Megan Carley and her dear niece Jessie Kelly.

She is truly going to be missed by all and hopes that you remember her by filling up those bird feeders, planting those flowers and enjoying those peaceful times.

A memorial/celebration of life will be held at 11 am, July 9 with a potluck dinner immediately following at Lott Baptist Church, 4257 S State Road (M-65), Glennie Michigan 48737.

To send flowers to the family or plant a tree in memory of Barbara, please visit our floral store.