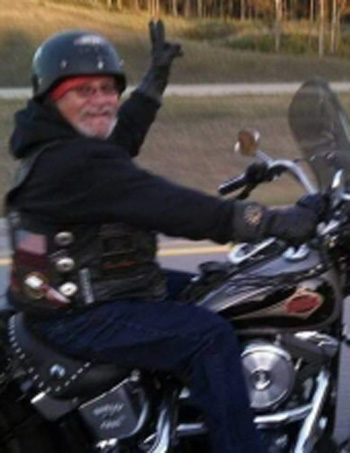 Gerald (Jerry) “Chico” VanBramer Medina, age 69, of Roscommon, died on Thursday, May 26, 2022, at his home after a short battle with cancer.

Chico was born June 30, 1952, in Sturgeon Bay, Wisconsin, the son of Ignacio Medina and Carole VanBramer. He moved to Roscommon in January 1965 and graduated from the Gerrish-Higgins School District in 1970.

Chico was a proud veteran of the United States Army, having served from 1971 to 1974, as a member of the 2nd Calvary Armored Regiment, stationed in Bamberg, Germany. He later went on to earn an associate degree of arts from Kirtland Community College.

Chico worked at Ken’s Tire and Auto as well as at Ray’s Auto Value of Roscommon, prior to working as a counter pro at Car Quest Auto Parts in Grayling for nearly 20 years.

Chico was an avid motorcyclist and was a retired member of the Harley Crue Motorcycle Club. He was also the proud owner and operator of Lost Dog Motorcycles. It was a way for Jerry to Honor the machines and the local people who owned them.

Some of the other hobbies Chico enjoyed included camping, flying model airplanes, playing guitar and watching the Green Bay Packers.

Chico will be remembered for his crude sense of humor and his frugal attitude.

Chico will be greatly missed by family and friends. He is survived by his sons: Danny (Cecili) Medina, Tony (Rosalee) Medina, and Norman (Brooke) Pratt; grandchildren: Avery, Paisley, and Gibson Jay Pratt; Life Partner, Denise Corwin; his red-headed stepdaughter, Carrah Stade; as well as grandchildren: Skylar and Hunter; his ex-wife, Dawn (Trevor Orr); as well as his dogs, Toby and Kizzi;

Chico is preceded in death by his parents, Ignacio Medina, Carole and Emmett Thompson.

Family and friends will gather for visitation on Wednesday, June 1, 2022, at 1:00 PM. At 2:00 PM, a time of Memory Sharing will be held with a Military Honors Detail to follow. All will be held at Wagner and Walsh Funeral Directors, 143 Lake Street, Roscommon, Michigan 48653.

Arrangements have been entrusted to Wagner and Walsh Funeral Directors, Roscommon.