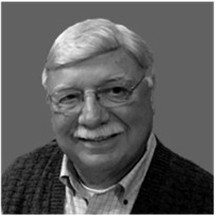 Larry Roy Thornton, 76, of Roscommon passed away July 28, 2017 at Munson Hospice House in Traverse City.
He was born March 25, 1941 in St. Johns to Roy E. and Ila Jean (Spiegel) Thornton. He married Carolyn J Vicek Jan. 21, 1961 in Bannister.
He resided in Ovid prior to moving to Roscommon in 1978.
Mr. Thornton was employed for 30 years with the DNR and DEQ retiring in 1997 as a district supervisor in the Environmental Response Division.
He was a member of Charles M. Engel VFW Post 4159, American Legion post 416, National Wild Turkey Federation, Grayling Moose, Houghton Lake Eagles, AARP and had been a former member of the Lions Club. He served as a board member for the Gerrish Higgins School District at the time of the building of the new Middle School. He loved to garden and enjoyed fishing, hunting, camping, music, travel and flying his Cessna. He was an auctioneer, when asked, for charity events. A ‘Jack of all trades’ he never hired out work he could do himself.
Surviving are his wife, Carolyn; two sons, Mike (Cathy) Thornton of LaPlata, MD and Dr. Tim (Kate) Thornton of Roscommon; four grandchildren, Alec, Clayton, Raynee and Ty; siblings, Kayla (Ron) Tipton of Dewitt, Ron (Kathy) of Grand Ledge and Judy (Ron) Neuman of OR; and sisters and brothers-in-law: Pat Latz of Elsie, Tom (Susan) Vlcek of FL, Mary (Phill) Fizzell of Oakland and Anne (Su Hood) Vlcek-Hood of Grand Rapids.
He was preceded in death by his parents and his brother, Darrell.
Services were held Aug. 1, 2017 at Walsh Funeral Home, Roscommon with Su Hood officiating. Burial was at Roscommon Village Cemetery.
Memorial donations may be made to Munson Hospice House or the charity of the donor’ choice.
Walsh Funeral Home, Roscommon is serving the family.
###
Au Sable Media Group, LLC, is a veteran-owned company that owns and operates the Roscommon County Voice, Crawford County Voice, Michigan Boomers and Voice of the Au Sable.
Our focus is on the positive people and events that make Northern Michigan a great place to live, vacation, work and play.
We have been commercial printers and publishers since 2010, specializing in brochures, rack cards, magazines and other newspapers and publications. A new addition to our stable of marketing products are various promotional items such as shirts, hats, mugs, water bottles and much more.
Through our publications and website at UpNorthVoice.com, we cover the following communities: Roscommon, Houghton Lake, St. Helen, Higgins Lake, Grayling, Frederic, Gaylord, Lewiston, Johannesburg, Atlanta, Hillman, Fairview, Comins, McKinley, Mio, Rose City, West Branch, Hale, Glennie, Sand Lake, Harrisville, Tawas City, East Tawas, Oscoda, Au Sable AuGres, Standish, Omer, Sterling, Gladwin, Beaverton, Kalkaska, South Boardman, Fife Lake, Mancelona, Alden, Traverse City, and Waters.
Our staff regularly covers the following school districts: Roscommon, Houghton Lake, St. Helen, Grayling, Mio and Fairview.
We can also be found on Facebook at Roscommon County Voice, Voice of the Au Sable, Michigan Boomers and Crawford County Voice.
For information on promoting your business in any of our products please contact Tracy Constance at 989-275-1170 (tracy@ausablemedia.com) or Walt Smith at 989-390-5359 (waltsmith1955@gmail.com).
If you have information you would like to see published, email Theresa Ekdom at theresa@ausablemedia.com, or Elana Warsen at elana@ausablemedia.com. You can also enter calendar items at your convenience at ww.UpNorthVoice.com.
Au Sable Media Group is an equal opportunity employer and follows all applicable state and federal laws.