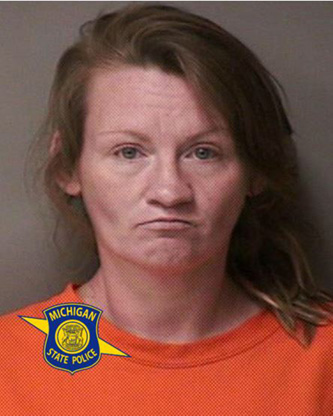 ROSCOMMON COUNTY – On Thursday, July 28, 2022, at approximately 4:30 p.m. a trooper from the Michigan State Police (MSP) Houghton Lake Post stopped a vehicle for an equipment violation on M-55 near Stone School Road in Roscommon Township. The driver of the vehicle, 36-year-old Jennifer June Teachout from Houghton Lake, displayed signs of being under the influence. Sobriety tests were administered, and she was placed under arrest. Teachout’s two children and another person were with her in the vehicle. The children were turned over to their father.

Teachout was arraigned on August 1 in the 82nd District Court in Roscommon County on one count Possession of Methamphetamine, and one count Operating Under the Influence with Occupant under 16/Child Endangerment. Her bond was set at $75,000 cash surety.