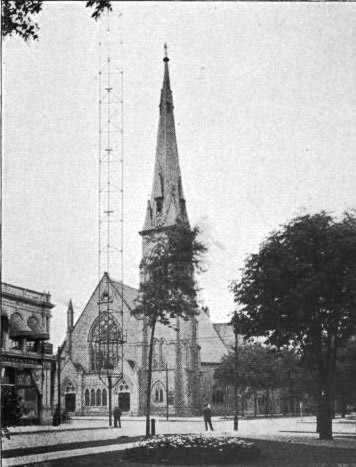 It was 50 years ago; I ‘ve wondered over the years why God entrusted me with “taking” the Martin Luther King assassination story from Memphis by phone in 1968.

But as I look back I can see that the links to my life and racial issues were not accidents.

Through my historical research of Roscommon, I’ve linked our community to Dr. King. George O. Robinson, Roscommon’s founder in 1872. He was an important officer of Michigan’s first Methodist Episcopal Church for 20 years beginning in 1863; the church was founded in Detroit in 1810 as Central Methodist Church.

Dr. King spoke at that church in Detroit just two weeks before he was assassinated. Dr. King also gave a version of his “I have a dream” speech in Detroit before delivering it in Washington, D.C.

It’ the church that provides part of the connection. George Robinson’s family donated a large organ to the church in 1915 in his memory. The organ is still used today and is valued at well over a $1 million.

I had served in the army from 1959-62 and lived in a barracks where only two of us were white. It was a wonderful experience. Many of those soldiers had come from the inner cities of South Philadelphia, Baltimore, Washington, D.C., Chicago. Some of them already had bullet hole scars from their days on the streets.

During basic training at Ft. Jackson I attended a segregated music concert in August 1959 in Columbia, SC where the “colored” were required to sit downstairs because the musicians were colored; the whites sat in the balcony. Even though we soldiers shared the same barracks we could not go to town together as colored and white.

I found the concert interesting and amusing at the same time. The government segregated the people, but they all heard and enjoyed the same music. You can’t segregate music.

I was attending the University of Missouri School of Journalism in April 1968 and the school didn’t have fax machines or computers. We had one electric typewriter; the rest were the old fashioned manual versions.

It was about 8 p.m., Saturday night and I was counting the minutes when my week would be over. I was working spring break inter session as a reporter for the Columbia Missourian, the school’s daily newspaper.

By working a full week of these vacations and semester breaks I could get an hour’s credit in reporting class. I also worked full time as an editor/reporter across town for the Columbia Daily Tribune and would go back to work there the following Monday.

Things were quiet that Saturday night when the phone rang, and the Missourian editor said, “Fishel take this call.” It was from Brian Brooks a former MU student and now working for a newspaper in Memphis. Brian later became a faculty member of the school of journalism and worked as a reporter in Viet Nam, where he was awarded the Bronze Star.

I picked up a black desk-type rotary telephone and propped it up to my left ear with my shoulder, as I had done many times before. Brian read his story to me, line by line.
I typed a few words on the manual typewriter and read them back to him until we had completed the entire story from Brian’s perspective. It was about how Memphis was not a likely place for this assassination to have taken place and the gloom and sadness that spread across the city.

I didn’t save a copy of the story because I didn’t write it nor realize that there would one day be a national holiday in memory of Dr. King. Taking the story was just part of my job.

Monday I went back to work for the Tribune and heard about a planned King peace march to the Boone County Courthouse, two blocks from the Tribune office. I went up there and climbed the nine flights of stairs in an office building across the street from the courthouse and went out on the roof and took pictures of the long peace march as it proceeded several blocks up the hill to the courthouse. One of my pictures ran in the middle of the Tribune’s front page the next day.

I thought my connection to Dr. King was now over. But it wasn’t.

In 1970 I was asked by a Central Missouri League men’s baseball team to accompany to Jefferson City as a reporter. They were scheduled to play the State Prison Team. But of course, all of their games had to be played inside the maximum-security prison.

I checked in my camera and all other loose articles at the game. Then went through several cell doors and out onto a very large athletic field, surrounded by high stone walls and guard towers, where guards were armed with either shotguns or machineguns. I later learned this was Missouri’s oldest prison. It had its own gas chamber as well.

The prison is closed now and serves as a museum.

The ball game was played. The prison team won due to their giant first basemen hit three long home runs, one to each field.

I later learned this was the prison from which James Earl Ray had escaped sometime before he shot Dr. King. From reports I have read, Ray escaped by hiding in a bread truck and rode out of the prison undetected.

Note: I am still working on Roscommon County history and a story about a Union Civil War veteran who settled here in the 1870s. His mother, who visited here in 1880, taught at a southern plantation in Mississippi in the early 1830s and met a little girl from a neighboring plantation who one day would marry Jefferson Davis, president of the Confederacy.