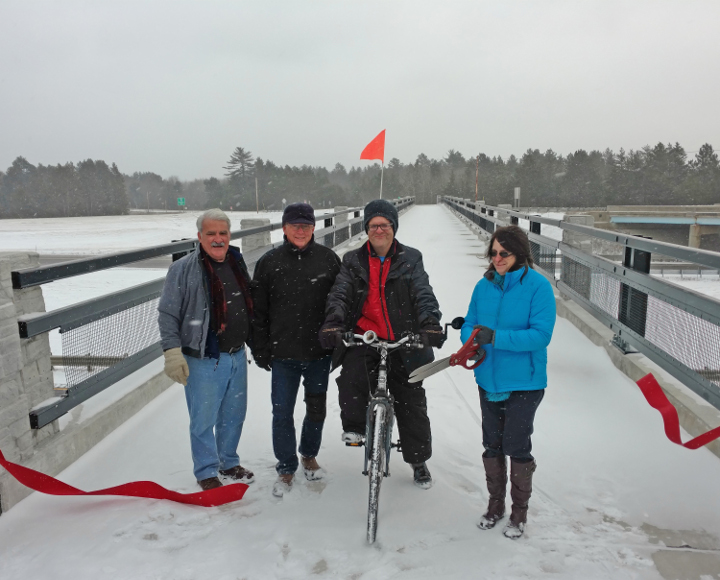 GRAYLING – Hikers and cyclists now have a safe path across I-75 from Grayling to Hartwick Pines State Park.

This construction on this trail started back in 1999 and is now complete. A short dedication ceremony took place on Dec. 6.

The plan to connect to Hartwick Pines and other state parks in the area actually started before 1999. The first meeting was held in the back of the Grayling Restaurant, at the big round table.

‘We received interest and help from everywhere’ stated Wayne Koppa, Crawford County Multi-Purpose Trail Committee member. ‘The Michigan Department of Transportation, Departmentof Natural Resources, Crawford AuSable Schools, Transportation Authority, Road Commission, Grayling Charter Township and many donors made this possible. The Rails to Trails organization that evolved in the Michigan Trails and Greenway Alliance held educational conferences that helped tremendously. It was surprising how many people wanted this to go forward.’

Recently, the development of non-motorized trails rose to new level of interest when Governor Rick Snyder announced Michigan’ intention to establish a cross state trail going into the Upper Peninsula to the Wisconsin Border. In an interview with Michigan Bicyclist published by the League of Michigan Bicyclists Governor Snyder stated ‘It’ a quality of life issue. Michiganders love the outdoors. That’ something we don’t talk about enough. A lot of people here have a second place, or if they don’t, they’re out enjoying the state parks and the recreation areas in our state.’

The bridge provides an important link from Hartwick Pines State Park to the Iron Belle Trail that is currently being planned and developed. The Iron Belle Trail connects Belle Isle to Ironwood. This 791-mile trail coming from the south, will eventually connect three State Parks which include North Higgins, Hartwick Pines and Otsego Lake which passes through Grayling.

These three State Parks receive over 400,000 visitors per year and the trail is expected to encourage a safe, nonmotorized route between them and increase non-motorized visits from one park to another and the communities along the trail.

Repurposed Federal earmark transportation funds were identified and approved for use to partially fund this bridge portion of the Grayling Bicycle Turnpike project. The total bridge project cost is $1,897,500.00. The federal earmark funds are $912,859. Additional funds to construct the bridge came from federal and state funds such as toll credits $116,930, Access to State Parks $406,722, Transportation Alternatives Program $200,252, and MDOT state transportation funds $260,737. Because of the types of funding the project is being administered by the Crawford County Road Commission.