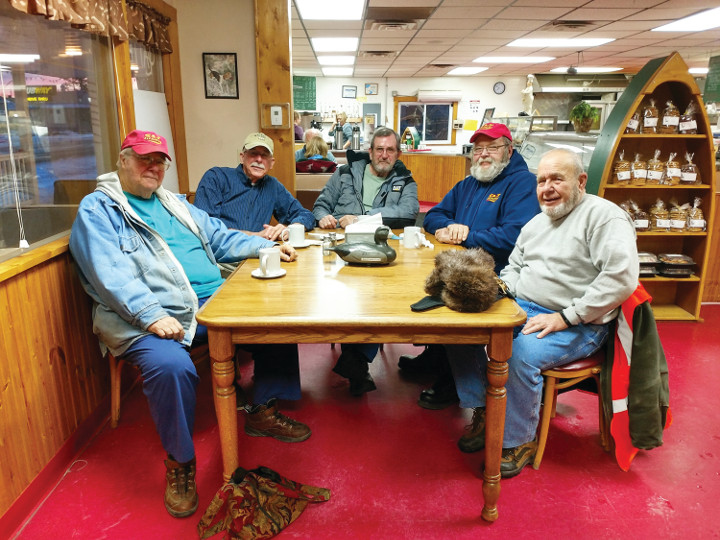 ROSCOMMON – You can find them at any family restaurant in the mornings –the locals who all sit at ‘their’ table, drinking coffee and talking about anything and everything. But at the AuSable Bakery and Creamery in Roscommon, there is an added member who, while is very quiet at the table, speaks volumes in the community – the Early Bird duck decoy.

Sue Jock, owner of the Creamery, explained the duck and its significance.

‘When we opened the bakery in 2013 we focused on a healthier alternative (from fried foods) and community giving, not only giving to area fundraisers and leftovers to the food pantry. Knowing that we would have a group of guys in for coffee every morning I though what a better way to raise money than with change,’ Jock said.

‘I found this old duck decoy in the garage and GÇª because it was hollow we cut a hole in the top and put 25 cents on it. I figured we passively spend change every day, why not turn it into a charity donation avenue. Every morning the guys come in, as many as 10 during the summer and four to five in the winter, they solve the communities problems, argue over politics and put a quarter in the duck. The duck holds between $250 and $300 and over the years we have collected $1,836.

‘These funds have been distributed to the community’ food pantry and Northern Michigan Children’ Assessment Center. They briefly discuss how they would like to use that money for a donut machine instead but each time their generous hearts agree on a community organization in need. No one misses a quarter but the $1,800 dollars impacts any organization in need, it’ easy, give or donate your time today,’ Jock added.

There were five sitting around the table the other morning, a table donated by another member of the morning coffee club, John Somes. And the topics were, as Jock stated, politics, hunting, fishing, and their dogs.

‘We start early so we can solve all the world’ problems by 8,’ said one.

‘We mostly complain about politics,’ said another. ‘But we never leave mad at each other,’ he added.

AuSable Bakery and Creamery is located at 205 N. 5th Street, Roscommon. Stop by, have a cup of coffee and a baked good or scoop of ice cream, and drop a quarter in the duck. It’ small change that adds up to bigger change.

‘No shave’ aims to raise money for Christmas

FLASHBACK – Jeweler in the making