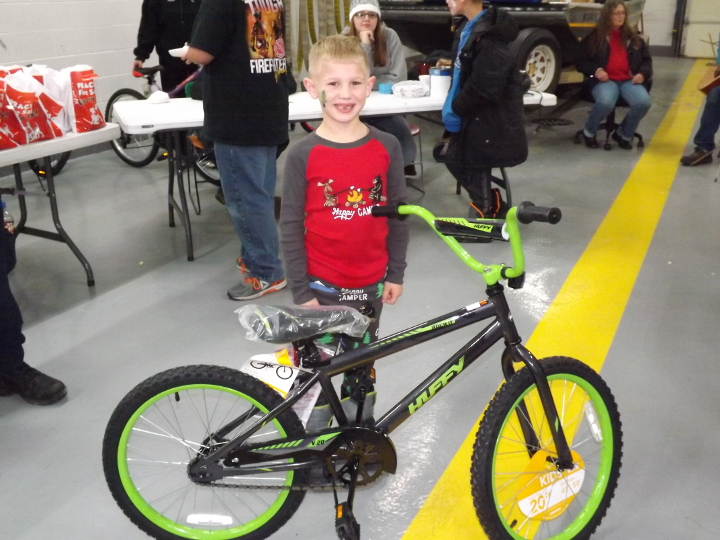 MARKEY TWP – The Markey Township Firefighters Association held their annual Christmas Tree Lighting with Santa event Nov. 25 at the Markey Township Fire Hall as they have for the last two decades. The event was free and open to the public. Santa and Mrs. Claus rode in on a Fire truck complete with flashing lights and sound. They exited the fire truck and made their way toward the crowd surrounding the tree waiting for Santa and his Christmas magic to light it up. With a count down from 10 started by Mrs. Claus the tree lit up in full color from the bottom to the top star for all to see.

Inside there was live entertainment provided by guitarist and vocalist Dan Patch, raffles to give away three new bikes, five blue plastic kids snow sleds, two ‘Annabelle’s Santa’ books, along with a few character tin lunch boxes with $25 gift cards inside donated by an anonymous donor. There were donuts donated by Cops & Donuts along with cider and apples donated by Bart’s Fruit Market. The Firefighters had other snacks and refreshments on hand for everyone to enjoy. Students from the Houghton Lake National Honor Society (NHS) and a few other student volunteers helped out with face painting for the children.

All the good little boys and girls lined up for their turn to sit with Santa and tell him what they wanted for Christmas this year. After each one was done they received an assorted goody bag from the Firefighters and EMS of Markey Township. The event ended after all the good little boys and girls had made their Christmas wishes to Santa and all the raffle items had been collected.