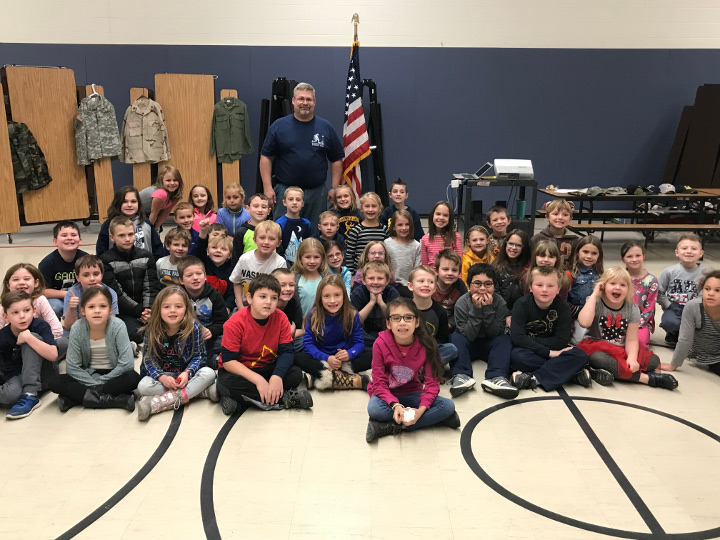 ROSCOMMON – Veterans Day is observed Nov. 11 each year as a day to honor all military veterans. The major hostilities of World War I were formally ended at the 11th hour of the 11th day of the 11th month of 1918, when the Armistice with Germany went into effect. The United States previously observed Armistice Day which was renamed Veterans Day in 1954.

Traditionally, ceremonies occur around the county in the morning, with schools holding assemblies and county veterans holding one at the memorial outside the CRAF Center in Roscommon at 11 a.m.

Witherspoon grew up in Port Hope, a small town in the thumb of Michigan. He spent 22 years in the Active National Guard, and moved to Roscommon about nine years ago while working at Camp Grayling.

He started visiting his local elementary schools when his oldest two sons were in school. And he continued the tradition when his youngest, Shawn, was at Roscommon Elementary. Last year’ graduating class was the first class Witherspoon spoke with at Roscommon. Shawn is now a senior at RHS.

Witherspoon, a retired Readiness Non Commissioned Officer, talks to the kids, catering his program to the ages of the students. He talks about respect for the flag along with the correct way and place to dispose of old flags. He explains the different ribbons a veteran may be wearing, and what the different (service) hats are. And he talks about showing respect to the Veterans they meet.

‘I enjoy talking to them,’ Witherspoon said. ‘It’ fun for me.

‘One of my students here, when I drive school bus, he comes up to get off the bus, thanks me for my service and shakes my hand.’

While his program and photos used to center around Iraq, he now keeps the locations more general, knowing service men and women are stationed around the world.

‘We’ve got one student I know of, their father is in Africa now,’ Witherspoon said.

After talking to about 250 K-3rd grade students this year, Witherspoon plans to keep his tradition going in the future.