Ursula Latreille: Leading the way on the road to recovery 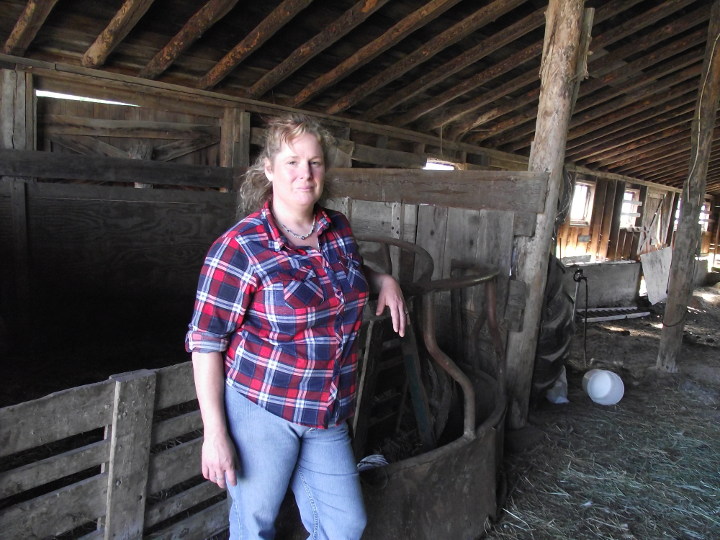 CURRAN – Ursula Latreille is living proof that a life can change for the better.

In 2009 the 46-year-old mother and grandmother was ‘a heavy drug user’ who kept her long term daily drug habit a secret from even the closest members of her family. Now she’ a farmer, community activist, and mentor’in addition to working at a restaurant and raising her four-year-old grandson.

‘Every day I would pray to God to help me quit, but I kept putting myself in situations where I would use drugs,’ she says, reflecting on a time in her life when she was unemployed and unconvinced of her ability to overcome her addiction.

She quit drugs in February 2009 and began the process of rebuilding her life around more positive choices. By July she was ready for a challenge that many thought absurd:
She would ride her bicycle from Curran to California.

‘I wanted to know that I could do anything I set my mind to,’ she explains.

It was an ambitious goal for the woman who had only completed one summer of training on a bike ill-suited for long distance travel.

‘The people at the bike shop said, ‘That’ not the right kind of bike for that ride,” she recalls. They urged her to at least upgrade to more durable tires, but Latreille declined. She also declined to learn to change a flat tire before embarking on the cross-country trek.

‘It was expensive to buy new gear and I figured I’d be fine with what I had,’ she recalls with a laugh. ‘I should have listened to them.’

Seven weeks and seven flat tires later, Latreille arrived in San Francisco, with renewed faith in herself and others (not to mention a newfound respect for bike shop expertise). She credits the kindness of strangers for seeing her through on the 3,165-mile journey.

‘Nobody ever said no,’ says Latreille, who pitched her tent outside of churches and homes after knocking on doors to ask permission. ‘Sometimes they said, ‘You’re not sleeping in the yard; you’re sleeping in the house.’ Strangers also fed her and washed her clothes, to Latreille’ pleasant surprise.

‘I don’t mean to sound crazy, but I really think God put those people in my path to help me,’ she says.

Helping others is a calling that Latreille has embraced since returning from her trip.

‘I tell my husband that my job is to help others, and as long as I’m doing that, we’ll be fine,’ she says, downplaying her personal role in an impressive list of contributions to friends, family, and the community.

She shares responsibility for fifty head of cattle plus a gaggle of chickens, a role she took on eight years ago to help out an elderly neighbor after an injury prevented him from performing farm chores on his own. In her spare time she teaches her four-year-old grandson to read and dreams of hiking the Appalachian Trail together.

‘I want him to know that he can do anything,’ she says.

That’ a message she works to convey to the community at large. Latreille co-founded the Many Against Meth (MAM) Project, devoted to substance abuse education and support in Oscoda County, a community that she says is currently being ravaged by opioid abuse.

‘It’ so important to give kids accurate information about drugs and alcohol,’ she says, ‘so that when they encounter them they are prepared to make healthy choices.’

Equally important, she insists, is to rewrite the false narrative that addiction is a dead end road.

‘People look at my life today and they think I’m such a good person,’ she says. ‘I am open about my past because I want them to know that no matter what choices you’ve made in life, a better future is possible.’

Trip on Route 66: Old roads can revitalize a town