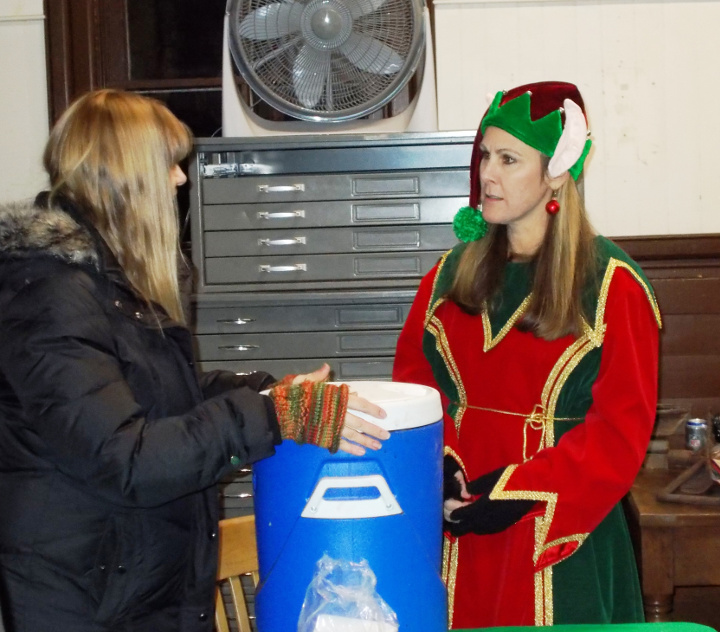 GRAYLING – His arrival was announced by a shrill train whistle and the clang of the crossing signal with Santa himself riding on the front of a Lake State Railway locomotive. Santa’ wave and ‘Ho Ho Ho’ delighted the gathering crowd of children and adults alike who were present for his arrival.

The Santa Train which arrived in town Dec. 8 was organized by the employees and administrators of Lake State Railway. The purpose of the ‘Santa Train’ was to collect toys and gifts for ‘Toys-for-Tots’.

The mission of the U. S. Marine Corps Reserve Toys for Tots Program is to collect new, unwrapped toys during October, November and December each year, and distribute those toys as Christmas gifts to less fortunate children in the community in which the campaign is conducted.

The ‘Santa Train’ arrived at the Historical Museum promptly at 4 p.m. Santa and Mrs. Claus greeted the children in a beautifully restored antique passenger car built in 1924. Santa brought several of his elves and also enlisted the help of ‘Rudolph, the Red Nosed Reindeer’, a ‘Minion’, ‘Olaf’ the giant snowman’ and ‘The Grinch’ to delight the ‘kids’.

After the children had a chance to whisper their Christmas wishes in Santa’ ear they were invited into the Historical Museum for hot chocolate, Christmas Cookies and a much enjoyed warm-up, all compliments of Lake State Railway.

Inside the original Telegraph Office in the Museum, WQON of Grayling (100.3), which helped promote the event, provided music and an ongoing narration of the events. There were drawings for various prizes offered by local merchants and by WQON as well.

In the three hours Santa and crew were in town, more than 200 kids sat on Santa’ knee, drank over 300 cups of hot chocolate, ate nearly 30 dozen cookies and contributed eight full boxes of Christmas toys. The donated toys will join those toys collected by other groups and go to the ‘Christian Help Center’ in Grayling to help assure a Merry Christmas for needy families.

According to John Rickoff, CEO of Lake State Railway, the Santa Train was the brainstorm of the employees. All of Lake State’ 80 plus employees helped put the program together and almost two dozen came on the Santa Train in costume, plus many more that worked in the background to help ‘make it happen’. John indicated that his year was a trial run and if it worked well, they hope to expand the program to many more communities along their service routes.

Key to the program’ success was the Crawford County Museum, who turned on the heat, threw open their doors and invited everyone into the original train depot that served the Grayling lumbering industry for a century and a half.

Will the Santa Train be back next year? You bet!