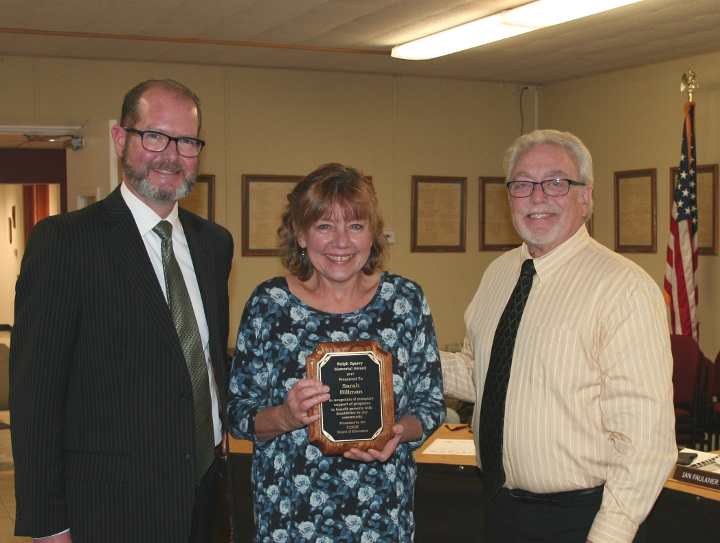 REGION – The Ralph R. Sperry Memorial Award is presented annually to a member of the COOR Intermediate School community who has represented the commitment to serving the persons served by ROOC , Incorporated.

Mr. Sperry was a community leader who gave many years of dedicated service to assist adults with disabilities and their families. Officials said he was one of the four founders of ROOC and guided the program through the formative years of its operation. He was committed to educating the general population of the needs and resources of the disabled members of our community for decades.

The 2017 Ralph R. Sperry Memorial Award was presented to Sarah Billman Dec. 13 at the COOR ISD Board of Education meeting. Sarah started at ROOC in 1982 as a work supervisor. At that time, there was no community integration program, just skill training. She then became a program implementer, which was followed by the position of program manager.

As ROOC started moving toward more community involvement, Sarah sought volunteer opportunities such as Adopt A Road and Meals on Wheels. Later she took a blended position doing job placements with Michigan Rehabilitation Services and ROOC. After eight years of the blended position, she accepted the opportunity to return to ROOC as Program Manager. She finished her tenure in 2016 in the position of Director of Services.

Sarah and Tod Billman have been married for 13 years, They have one daughter, Andrea and one granddaughter, Avery. In addition to her service to the people at ROOC, she has volunteered for United Way, Special Olympics and Heartland Hospice. ###

The way it used to be

Women in business: Blazing forward with an eye toward the future