Across MI high water continues to have impact 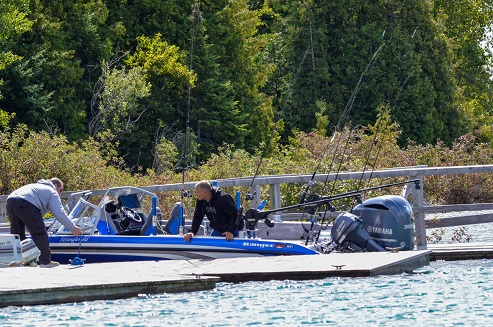 From the Porcupine Mountains to Lime Island and Harrisville to Tawas and Van Buren state parks, record or near-record Great Lakes water levels have produced powerful impacts forcing the closure of numerous facilities.

ranging from homes to harbors.

created numerous hazards for boaters, swimmers and even wildlife.

Over the past few years, the rising Great Lakes have posed significant challenges to maintaining our recreation facilities across the state,” said Ron Olson, chief of the Michigan Department of Natural Resources’ Parks and Recreation Division. “In turn, these challenges have increased costs to our already strapped infrastructure improvements budget, even before the additional impacts from the coronavirus pandemic.”

Lime Island Recreation Area, in the eastern Upper Peninsula, is closed for the season because of submerged docks, as is the Hammond Bay State Harbor on Lake Huron.

is also being redesigned to help protect the eroding bank. The cost for those activities tops $3 million.

highwater records at some point this year. Lake Ontario last hit a record high in September 2019.

Preliminary estimates show precipitation in the Great Lakes Basin was slightly below average in June.

The Great Lakes Basin includes 14,000 miles of shoreline along eight states and two Canadian provinces, with 200,000 square miles of land and 95,000 square miles of water. The basin covers a total of 2,212 miles from eastern Minnesota and northern Wisconsin to the Gulf of St. Lawrence in the Atlantic Ocean.

After more than a decade of low Great Lakes water levels, including record lows, the trend toward higher water began in 2013, marked by a record rise and record highs, Warren said.

on the Great Lakes in more than 120 years.

“We’re seeing some of the highest water levels in recorded history on the Great Lakes,” said Keith Kompoltowicz, chief of the Army Corps’ Watershed Hydrology Branch. “And that’s the result of very wet weather experienced over the last several years.”

water conditions prevailing on many waterways across the state.

Each conservation officer is assigned to patrol specific areas of the state, so they are familiar with the fluctuating water levels. We recommend researching the area you’ll be navigating and remaining vigilant to all markers and buoys.”

Higher waters can cause fast-flowing currents, deeper and colder water, unpredictable conditions and more debris floating under the water’s surface – especially on rivers. The law requires that all vessels, including kayaks and canoes, be equipped with a personal flotation device for each person on board.

and environment, great lakes and energy, in addition to groups representing local and federal officials.

The U.S. Army Corps of Engineers, Detroit District, said its personnel are “committed to ensuring public safety while providing technical expertise and assistance during this time of high water around the Great Lakes.”

“During response operations, our Emergency Management Office, conducts emergency operations to save lives and protect improved properties,” the Army Corps states on its website. “In the event of natural disasters, such as flooding, emergency permit procedures can be activated to expedite permits to reduce further damage and protect life and property.”

of the Great Lakes and the conditions that lead to water level fluctuations.

ebpage maintained by the DNR

Various watercraft controls and other restrictions have been put in place to protect people and property.

, most from Lake Michigan.

have responded to several incidents of boaters or swimmers in trouble.

Independence Day weekend in the last five years, responding to more than 100 search-and-rescue calls and saving or assisting more than 300 people throughout the region.

Despite those successful efforts, two lives were lost on the lakes during the July 3-5 holiday weekend.

Coast Guard officials said then the guard was approximately 200 search-and-rescue cases ahead of 2019’s pace and about 60 cases over the five-year average.

High activity has since continued to be reported. For the last weekend in July, the Coast Guard said crews throughout the Great Lakes were involved in 81 cases, saved 56 lives and assisted 264 people.

nesting birds like eastern meadowlarks, wild turkeys, mallards and piping plovers can experience nest failures when flooding occurs, which can mean the loss of young birds.

To help alleviate flooding, wake restrictions are in place to protect shoreline habitat for fish and animals.

With continued dangers to people, property and wildlife posed by high water levels across Michigan, the DNR is urging anyone venturing out on the water – from anglers and boaters to swimmers, waders and beachcombers – to remain alert and aware of potential hazards to help prevent accidents and help keep everyone enjoying the state’s wonderful water resources safe.

MIO - The organizers of Michigan’s Nor-East’r Music & Art Festival announce that this year's (2021) event has been canceled for a second time...
Read more
Features

CADILLAC – With the holidays fast approaching, the Huron-Manistee National Forests are offering a free Christmas Tree tag to any 4th and new this...
Read more
- Advertisment -