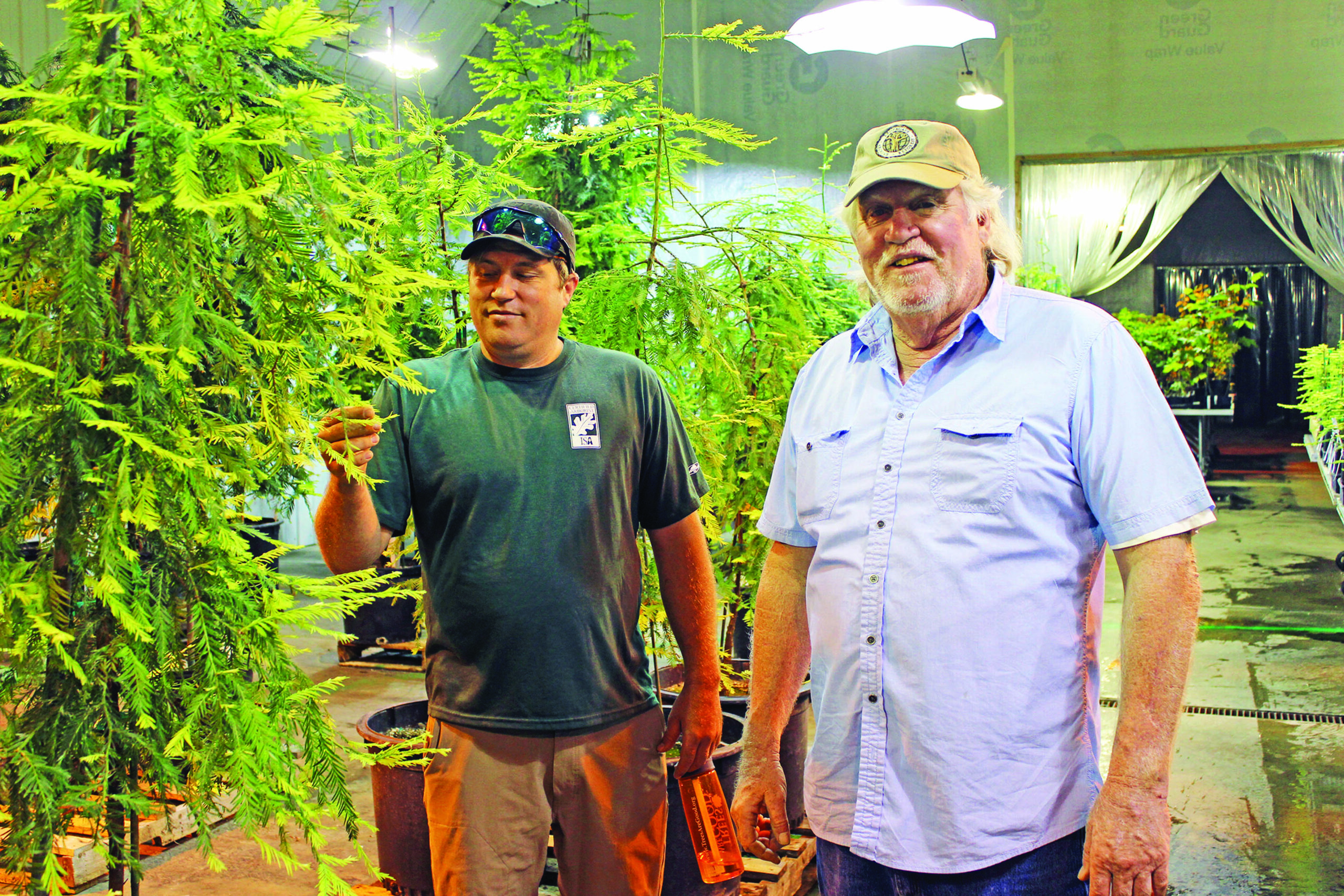 COPEMISH – How does a non-profit organization located in the Copemish Michigan, a small town between Traverse City and Manistee, get to be world renown, written up in the NY Times not just once, but many times. Their office walls are covered with news articles alongside handwritten notes from school children.

Archangel Ancient Tree Archive (AATA) is making the news for big reasons, really big reasons. They are cloning some of the largest, oldest trees known to man, and planting forests of these ancient trees.

David Milarch founded AATA with his oldest son, Jared. David is the second of three generations in the wholesale shade tree growing business which supplied cities and big nurseries with shade trees. His father started the business in Copemish in 1964, and Jared recently purchased the family tree farm. David’ youngest son, Jake, is the chief climber and the chief propagator at AATA.

David and Jake are headed to California to a grove of giant sequoias – the same grove that ‘The Return of the Jedi’ chase scene was filmed at.

‘Jake and I lead a party of 30 people from around the world, to the giant sequoias in southern California, at 8,000 feet on top of the mountain. They have 30 foot diameter trunks. They were 1,500 years old when Christ walked the earth,’ Milarch said.

Jake will be climbing over 300 feet to the tops of the trees during their exploration to collect cuttings. These cuttings will be taken back to Copemish, cloned, and become known as the ‘mother’ trees. Cuttings from the mother tree will also be cloned, and soon there will be thousands more sequoias in the world. These trees are donated to the schools, conservation districts, tribes, and others who will plant them, creating forests of ancient trees.

What made a tree farmer transition from planting and selling shade trees to propagating and giving away clones of ancient trees?

‘About 20 years ago (the shade trees) started to die and we didn’t know why,’ Milarch said, noting that climate science is studying its effects on the trees.

‘We found out it was environmental stresses and new diseases. It wasn’t easy to find that outGÇª it became very apparent to me that climate change is real.’

Something else happened that same time – Milarch died.

‘I had a near death experience 20 years ago. And when I came back from the other side they said ‘You have work to do.’ Boy, they weren’t kidding!’

Milarch went on to explain.

The National Tree Program began in 1940 by the American Forests conservation organization. They measure the trunk circumference, height, and crown spread on big, old trees. The individual tree in the United States with the highest score is named the ‘national’ or champion tree for its species.

At that time, Michigan had 49 different champion tree species, many of them in northern Michigan. Milarch decided he and his sons, who were in middle school at the time, would start with those trees.

‘We’ll go climb those trees, get the material off of them, and try to grow them,’ he said.

However, it wasn’t that easy. Milarch had sought help from Michigan State University (MSU). Dendrologists (tree scientists) at MSU and other experts he spoke with said it couldn’t be done, and offered no help.

‘They told me the older, the bigger the tree, the more it does not want to be cloned. There are hormones that prevent it. It won’t work,’ Milarch said.

‘My father was alive then, and he asked one of his tree propagating nursery buddies in Oregon to try as a favor to him.’

His sons climbed the trees and collected some material which was shipped out to the nursery in Oregon.

A year later they got a call from the nursery. The Ash and Norway maple buds they had grafted on had grown seven to eight feet tall in one year and were still growing. The nursery wanted a quarter million more buds.

From those beginnings, they have gone on to propagate other ancient trees from around the world.

‘We have cloned trees all over the world. We’ve grown 22 (trees in Ireland cloned from 1,000 year old Oak trees) that many Irish people didn’t know existed. And I’m happy to say we are successful in cloning 3-4,000 year old redwoods and sequoias that everyGÇª ‘expert’ in California said couldn’t be done.’

‘We could make a million trees here and plant them all ourselves, but you’d eventually tire and run out of money and gas. So we started teaching the techniques,’ Jake said.