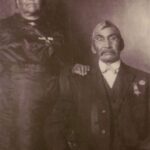 CRAWFORD COUNTY – Most visitors to Crawford County quickly learn about David Shoppennegon, Chippewa Chief and river guide, who resided in Grayling for most of his life. But David was not the only Native American who lived in Grayling. There was another Chippewa contemporary and friend who made his mark on history and ended up living in Grayling.

Thomas Kechittigo was born near Saginaw in Zilwaukee on May 15, 1836. His father, Abraham Ke-chit-ti-go was three quarter Chippewa and one quarter French. His mother, Elizabeth Ging-qua-nock-no-qua was full blooded Chippewa. Thomas lost both of his parents at a young age and had to learn to fend for himself. He was a hard worker and despite facing life at a young age, always came out ahead.

As he matured, he became a farmer and married Arloah Cag-e-pe-qua of the Chippewa Nation. They had six children.

At the age of 27, Thomas had become an accomplished marksman. He tried to enlist in the Army but was rejected because he was an Indian.
“The officers told us they would not take any ‘Injuns, as they were afraid we would get crazy and murder and scalp all the women and children.”. (Crawford County Avalanche – May 27, 1993). He then applied and was accepted by Company “K” of the First Michigan Sharpshooters as a Sergeant. He went on to become one of the best sharpshooters in the Civil War. He was looked up to by his peers and admired and respected by his superior officers.

During the war Kechttigo participated in several battles of historic significance including the “Battle of the Wilderness, Spottsylvania Court House, Tolopotomy, Cold Harbor and the capture of Petersburg”. He was wounded twice.

In 1864, during the Battle of Spottsylvania, he took a Confederate Minie’ ball to his left arm. The shot missed the bone but tore up the muscles which would cause him loss of the use of the arm as he grew older. He was wounded again about a year later when he was struck by shrapnel in his left shoulder during the battle at Petersburg. He was mustered out on July 28th, 1865 with an Honorable Discharge.

After the war Kedhittigo’s wife and children all died from smallpox. In 1875 Thomas remarried to Mary Ann Cob-bo-mo who was full blooded Chippewa. Together they had six children including a pair of twin girls.

Both and before and after the war, Kechittigo was what was known as a “river hog” – a lumberjack “known for his dexterity, agility and expertise in driving the logs through the turbulent waters of the spring run. He had excellent balance, aided by his spiked boots and peavey pole, which saved his life many times.” (Quita Shier of Midland County presentation on Thomas Kechittigo, June 19, 2014).

To provide for his family, Kechittigo also worked as a farmer, hunter, trapper, river guide, fisherman, railroad worker and lumber mill employee. After the war Kechittigo lived in Saginaw County for two years, Pinconning for 10 years, Oscoda for 15 years and on Mackinac Island for a year, He moved to Grayling in 1885. He built a home on Madson Street overlooking the AuSable River, and he and his family became active members of the Grayling Methodist Episcopal Church.

David Shoppenagon and family and Tom Chittago and family will appear at the social at N. Michelson’s tomorrow evening and will give native songs. (Avalanche 25 October, 1894.

The Indian Social held at the residence of Mr. N. Michelson last Friday evening was a pleasant and unique affair. David Shoppenagon, Chief of the Chippewas, and family, assisted by Tom Chittago, gave some interesting and novel examples of native songs and war dances. (Avalanche 1 November 1894).

Thomas Chittago was a member of the G.A.R. for 30 years. For 15 years he served as its color bearer.

In 1886 Tom Chittago was elected as a Constable for Grayling Township by a Republican Caucus. (There were many ways that Thomas’s last name was recorded: Chittego, Ke Che Ti Go, Chittago, Chittoga, Chittigs, Key-Che-Te-go, Ke Chittigo).

Thomas Ke Chittago passed away at Grayling Mercy Hospital after a severe attack of rheumatism on April 24th, 1916. Despite his rocky beginning in his younger years, Thomas had a reputation for honesty and integrity equal to any man. All his children predeceased him. He was 81 years old. His widow, Mary Ann died on February 24th, 1933 at age 98.

The story of Thomas Chittago is summarized by his headstone in Grayling’s Elmwood Cemetery just a few short steps from his friend Shoppenagon. His headstone, carved like a pine stump, bears his name and his rank of Sergeant in Company “K” of the Michigan Sharpshooters who served honorably in the Civil War.

These facts and much, more are housed at the Crawford County Historical Museum. Unfortunately, the museum has become a casualty of the Covid Virus. Due to complications in sanitizing and separation, the museum will remain closed for this season however it is still available for research, by appointment.

This time is not going to waste though as the staff is still busy developing exhibits and doing research as possible. Come visit us after this crisis is over.