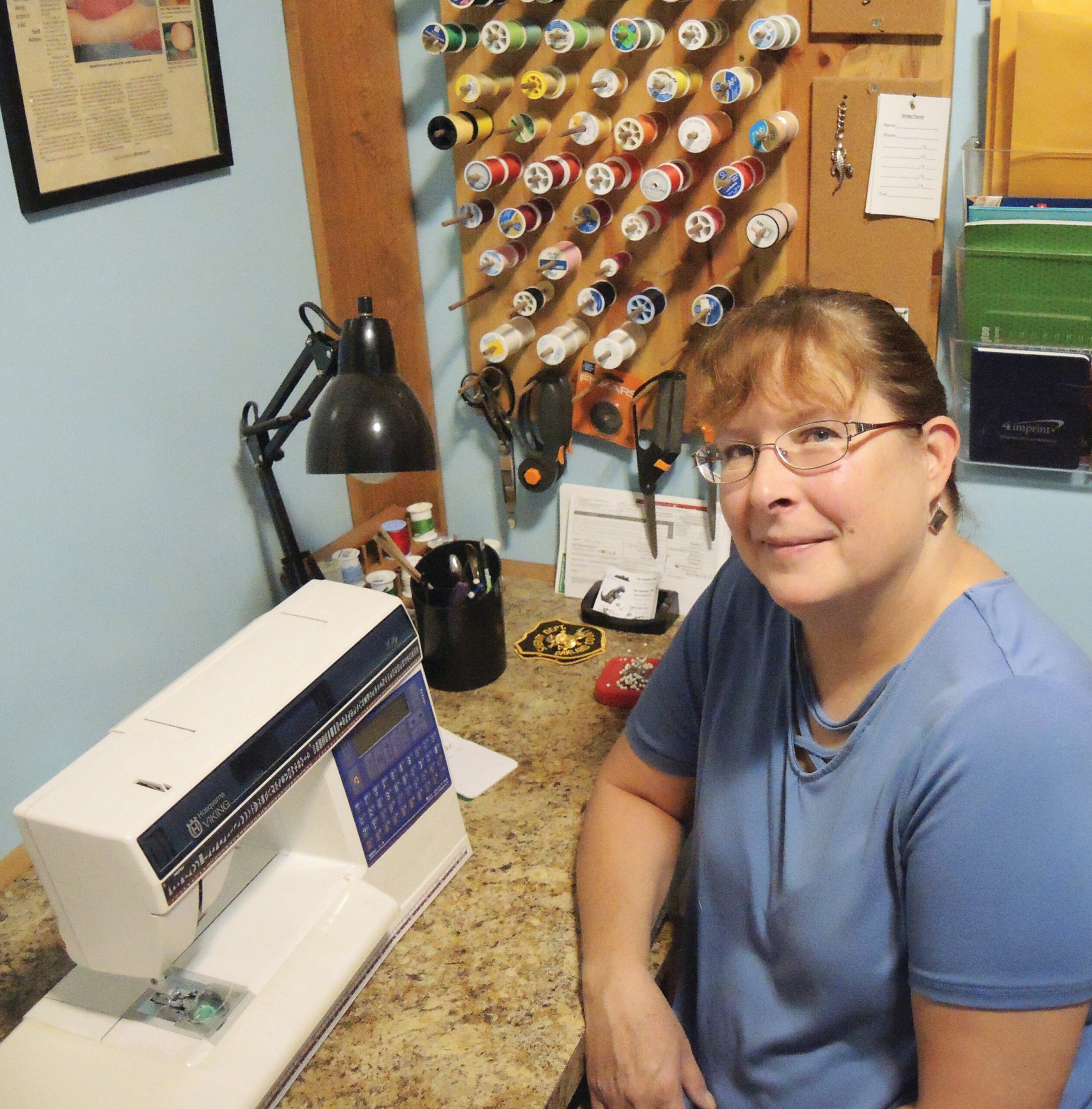 ELMIRA – Grayling native Sandi Johnson McIntyre has always been a do-it-yourselfer. Once she figured out how something worked, she just as soon do it herself than have someone do it for her.

‘Seems like I was always either too broke or too cheap to pay someone else to do it,’ said Sandi, with a laugh.

So, it was that after watching ‘Jurassic Park’ with her sons Mike and Marc, ages 9 and 7 respectively, in 1993 and seeing the delight in their eyes, she decided to try her hand at making dinosaurs.

Okay, so they were not living, breathing dinosaurs like in Jurassic Park, but stuffed dinosaurs her sons could cuddle up with.

She and her sister-in-law Carolyn went down to the store and looked over available patterns. They found two packages. Neither having a lot of money at the time, one bought the small dinosaur patterns package and the other bought the large dinosaur patterns. And they shared. Their children, nieces and nephews all received dinosaurs for Christmas that year.

As it happened, the boys’ friends also liked the stuffed dinosaurs and begged their parents to get them some. So, for a brief period of time, Sandi made a little extra money sewing more dinosaurs.

Her dinosaurs eventually became extinct for several years, until her boys were grown and out of the house.

Then, her first grandchild was born. While thinking of gifts, the dinosaurs came immediately back to mind.

As she began putting dinosaurs together, her mom and a friend, Gary Worden, helped out by stuffing the dinosaurs. Gary thought the dinosaurs were a wonderful idea and had her create more for gifts he wanted to give.

‘Gary started buying up dinosaurs right and left. He was my number one customer for the longest time,’ Sandi said.

It was at that point, Sandi first began to think about the possibilities of making money from her dinosaurs.

She started by going to Farmer’s Market in Gaylord. Her only sale was a Petoskey stone holding down her business cards.

Next, she tried selling them through a local business. That did not work either.

Disappointed, she decided to try selling just one more time. She bought a table at the Michaywe Art and Crafts Show. That was when her dinosaurs began to repopulate.

‘It was then I realized I just needed to find the right venue and right crowd! Then I did Thunder Over Waters and sold over $500 worth in one day.’

After this, she received a request from a friend to create some dinosaurs to be auctioned off to help a person in need. The request came with a condition: make the dinosaurs out of M.S.U. fabric.

With some fabric left over, she used up the rest on a small group of dinosaurs.

Each team dinosaur comes with a smaller, food dinosaur it can munch on. So, if a person’s favorite team is the Wolverines, the buyer can choose to have it eating a Sparty or Buckeye dinosaur.

Before the team fabric dinosaurs, her merchandise mostly appealed to young children, moms and grandmothers. With the addition of the team dinosaurs, however, teens, dads and grandfathers are even picking them up.

Now, she is even receiving mail orders for dinosaurs. Her creatures have been shipped to 20 of the 50 United States and even to Germany.

Sandi’s love of sewing had its origins in Grayling also. Her grandmother Evvie Lozon, was a well-known seamstress in Grayling. She had even done work for the National Guard Camp. When her grandmother became too busy, she trained and passed some of the work on Sue Louchart. Sue, in turn, passed the heavy work on to Sandi when she was coming close to retirement.

Sandi’s mother had also done alterations for the Grayling Merchantile and passed her knowledge on to Sandi while working on her projects also.

While growing up, Sandi attended Grayling schools from Kindergarten through sixth-grade and later from tenth to twelfth-grade. In sixth-grade her parents split up, she spent a little less than a year in Iran with her mom and then a few years in Kalkaska before returning to Grayling. She graduated in 1983.

While she now lives in Otsego County, she still comes down to Grayling regularly to visit relatives. Sandi is regular at the Grayling Promotional Association’s annual fall arts and crafts show where she is known by a new name, The Dinosaur Lady.

Sandi notes Grayling is always a great place to come back to.

‘The river. The woods. Berry picking, deer hunting, bear watching. Whatever you want to do.’

At this point, Sandi has created around 1,400 of her dinosaurs and is looking forward to creating many more.