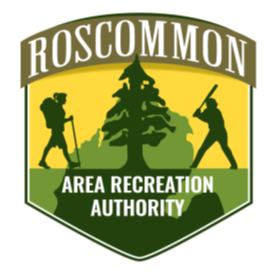 It has been 50 years since Roscommon formed the Roscommon Metropolitan Recreation Authority (RMRA). RMRA was formed in 1969 under the auspices of Higgins Township and the Village of Roscommon. RMRA is a governmental entity and not a 501c3, “Not for Profit Organization.” Its initial holding was an eight-acre parcel two blocks from the county court house. The property soon became Metro Park, adding ice rinks, basketball courts and ball diamonds. Metro Park now contains three baseball diamonds, a pavilion and restrooms. In 2014 extensive park renovations and upgrades were made with plans for future additions.

Over time, additional property holdings were added to RMRA’s responsibility. The CRAF (Community Recreation and Fitness) Center was created and added in 1993. The Marguerite Gahagan Nature Preserve was established and deeded to RMRA in 1997 and the AuSable River Center was included in 1998. In 2013 a land maintenance agreement with the mDNR was signed for RMRA to maintain and groom the trails at Tisdale Triangle for hiking, biking and cross country skiing. In 2016 RMRA was awarded the mParks Community Service Award from the State of Michigan.

was a former middle school building which has been comprehensively repurposed. It contains a full sized gymnasium for basketball, volleyball, and special events, a small court gym utilized for pickleball, two fitness rooms and aerobics room. Numerous classes including cardio-drumming, pound, kick start, astro-durance, clogging, karate and yoga are regularly scheduled. Over the past four years the center has been totally renovated. New plumbing, locker rooms, flooring, paint, fitness equipment, computerized 24-hour entry system and security improvements have increased membership from 149 per month in 2015 to 786 in Feb., 2020. It is the center of activity for numerous annual community events and hosts the Summer Concerts Series. Additionally, long-term leases are available for private and public rental.

is a sixty-acre natural area which includes an interpretive cabin, a handicapped accessible informational trail, a towering growth of pine forest, the headwaters for Tank Creek, a pond, and a well-marked foot trail network. Gahagan is well utilized by visitors and school classes as it serves to educate everyone about the value of conservation. It provides a quiet area close to downtown and schools for reflection and nature study. There is a naturalist on staff, offering year-round environmental education programs for area students and communities. The Preserve is run by a volunteer board and funded through community grants, donations by the public and an endowment left by Marguerite Gahagan.

was the former DNR Headquarters built by the C.C.C. (Civilian Conservation Corps) and was relocated within the Village. The 2300 sq. ft. building was renovated to accommodate displays of river history, river craft, artifacts and other educational material. The mission statement reads: “To educate the public about the heritage, artifacts, wildlife and environment of the great AuSable River. To provide a forum for those interested in keeping the river as a viable entity for its natural and recreational opportunities.” In the summer it is home of the Roscommon Farmer’s Market held on Saturdays from May to October.

For several years RMRA has lacked structure and funding to continue to support, let alone further recreation within the community. Typically, in a community, Parks and Recreation are managed by the cities, townships or villages. We strategically have some barriers fitting with this standard. We are community bordering two counties, located in Higgins Township with eighty percent of the population and the majority of the recreation assets sit within the Village or close proximity.

Indeed, there are many assets and opportunities in the Roscommon area, but an unfunded volunteer board cannot efficiently manage it all. Since recreation is one of the community’s largest impacts for economic growth and tourism, key members from the Township, Village, Recreation Authority, DNR and community met routinely in 2018 to assess barriers and move forward with a functional plan containing direction and funding for the future. The group next analyzed at the assets, infrastructure and funding within the Township, Village and RMRA. With that knowledge four outcomes were evaluated.

Presentations were provided for the Township Board and Village Council and with a general consensus the Recreation Authority could move ahead with a new plan:

RMRA will be renamed Roscommon Area Recreation Authority (RARA) to fit its multiple townships, two counties, and a Village demographic. Recreation is ranked third for driving economics in a community. This restructuring will open new doors for the community and its members. Opportunities and benefits from resources that are currently under-utilized within the surrounding community will impact our local based economy and tax base.

After 18 months of workshops and revisions, the Articles of Incorporation were approved by the Township and Village and have been submitted to the State of Michigan. The next steps forward will include appointing RARA board and adding a seventh member, finalizing and posting a job description for a RARA Director, with plans of interviewing by late spring.

The goal after the restructuring process will be focused on the new direction of the Roscommon Area Recreation Authority. Board meetings are open to the public typically the third Wednesday bimonthly starting in January each year. For further information contact Sue Jock-Chairperson of the RARA at rmrauthority@gmail.com.

The Brook is seeking healthcare workers