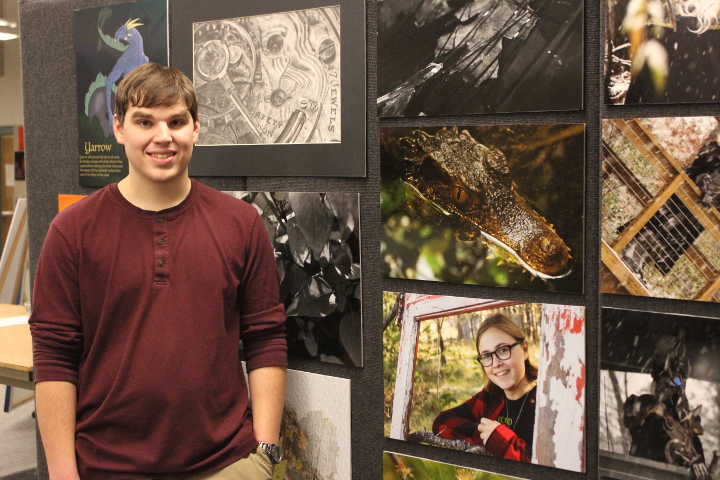 ST. HELEN – At the end of each semester at Kirtland Community College, the Art Department holds an art show with the student’ pieces. The Fall 2017 Art Exhibition was held Dec. 14 at the Roscommon Campus.

As a part of the art classes, Michigan art colleges talent recruiters hold portfolio reviews. After review by Kendall College of Art and Design recruiters, three KCC students were endorsed and are up for major scholarships.

Pat Karasch of Tawas will be attending Kendall for Product Design. Adam Thiel of Lewiston will be studying photography. And Jessie Tyo of Houghton Lake will be attending for Photography and Rendering with an emphasis on medical illustration.

Karasch designed an outfit last year which won him 3rd place (out of 150) at a recent Comic Con in Grand Rapids.

‘I would like to get into film, be that guy behind the scenes,’ Karasch said.

‘I like the tight rendering and drawing from a photo,’ she said. ‘I like recreating the photo.’

In the past 10 years KCC art students have received over $200,000 in scholarships according to Art Instructor Scott Rice.

Rice went on to explain that the amounts would cover a year’ tuition at the respective college.

For more information on Kirtland’ art program, go to www.Kirtland.edu.