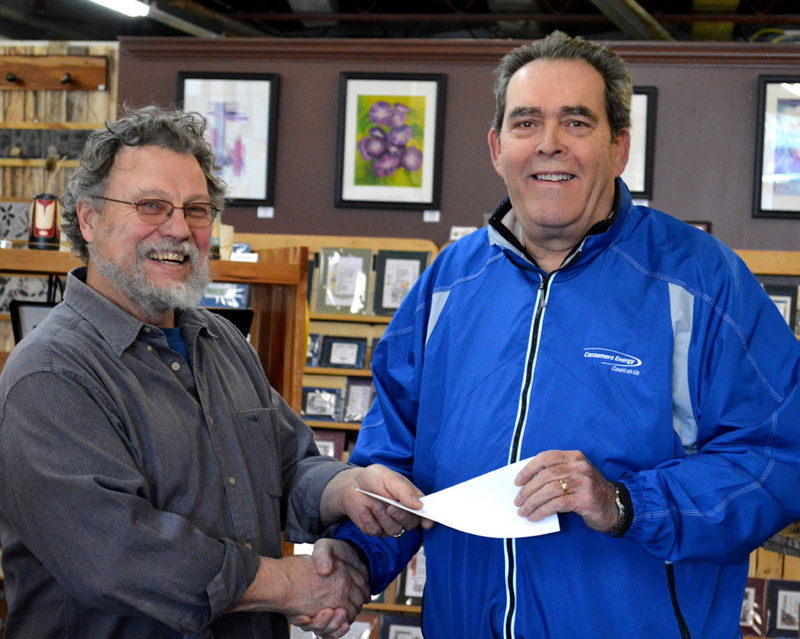 GRAYLING–Consumers Foundation grants AuSable Artisan Village $5,000 to support the current capital improvements including renovating the basement into a Creativity Center for children and adults. Jay Jacobs, Public Affairs Director/Area Manager for Northeastern Michigan at CMS Energy, on the right, is pictured delivering the announcement of support from Consumers Foundation to Terry Dickinson, Director of AuSable Artisan Village, on the left.

On December 21, 2016 Artisan Village launched a crowdfunding effort through the web site, Patronicity, with a goal of raising $25,000. The fundraising campaign ended on January 31, 2017 raising $25,718.00. However, during February and March, too late to be counted in the crowdfunding campaign, donations have continued to come in with the latest contribution coming from Consumers Foundation bringing the total funds raised to slightly over $40,000.

‘Consumers is proud to support Artisan Village and would like this gift to be a challenge to other corporations to support AAV and other arts and cultural programs in our region,’ commented Jay Jacobs.

Having succeeded in reaching the crowdfunding goal Artisan Village will receive a grant from Michigan Economic Development Corporation and Michigan State Housing Development Authority for an additional $25,000. ‘If we were to do all of the upgrades and capital improvements that are needed, it would take close to $100,000. We had to set a goal we knew we could reach to qualify for the grant from MEDC/MSHDA rather than basing our goal on the overall costs,’ said Dickinson, ‘We are really pleased and excited at the level of support we have gotten. <span “=””> <span “=””>We will use as much volunteer labor as available and stretch these funds as far as possible.’

Renovations have begun. Artisan Village obtained a demolition permit in early January to begin tearing out things that need to be removed and are currently waiting for architectural prints and a building permit to begin reconstruction.<span “=””>

Kathy Ellison and Tina Foster, both volunteers for Artisan Village, are interviewing prospective art instructors and putting together a schedule of ‘Summer Enrichment’ classes for children that will be scheduled for parts of July and August. This will be the maiden voyage of the Creativity Center.